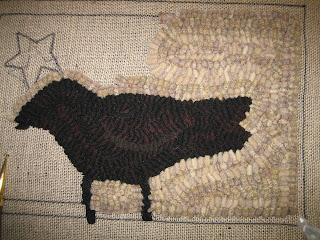 Two nights in a row!!!! I've gotten to hook in my hooking room!!!! Amazing! Again, while watching Dancing with the Stars (I'm glad they saved Cloris one more night ~ she's a character!), I hooked for an hour and got quite a bit of background done. I'm using a 9.5 cut for the background and a 9 for the crow ~ both those cuts make it move along pretty quickly and obviously, it's just working with very basic colors and filling in the space. That's what makes it a good beginner's pattern ~ you can just get the feel of working with the hook and pulling the loops! 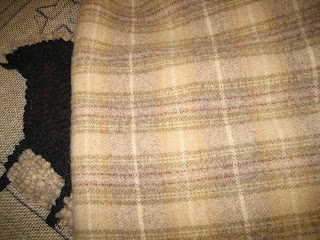 This buttery soft plaid makes a really nice neutral background for this old crow. The tricky part will be finding the right border wool ~ and I like a red or a gold star ~ that might be a little challenge for tonite's hooking! But I've hooked two nights in a row ~ I've done office work, two days in a row ~ and I've exercised two days in a row!!!!!!!!!!! I'm on a roll now, people!! By the way, I do sell the plaid wool for $14 a half yard, if you would like to try some for yourself!!

Yesterday, my friends and I went to an Amish farmer to buy pumpkins!! They were really well priced (cheap) at 20 cents a pound!! WE loaded up the back of Cathy's blazer and off we drove ~ all the pumpkins separated into piles so we each would know what was ours! Cathy came to a stop ~ put the brakes on ~ the pumpkins all started to roll ~ some of them flew up into the seat with me, between the captain's chairs ~ we had pumpkins everywhere and of course, after all the careful sorting ~ we had no idea whose was what!!!!!! Only the big green one that was mine ~ the rest all looked amazingly alike!! Pretty funny! Then Cathy and I went to the 'funky pumpkin patch' north of town to find the unusual white pumpkins, Cinderella pumpkins, bumpy ones, etc. We got pie pumpkins and the little ones that I put over the door transoms. It was a fun fall morning for three gals who have been neighbors for over 30 years!!

Off to get the gray hair colored and find some mums ~ time to dump the summer flower pots and adorn the gardens with fall things! I love the colors of fall and it brightens everything to add all those gorgeous oranges and yellows to what has become a little drab. Enjoy your fall day, wherever you are!! Oh ~ now I've blogged two days in a row, too ~ this is scary !!
Alice
Posted by Alice ~ Folk Art Primitives at 7:36 AM

I just about fell off of my chair picturing you all being bombarding with the rolling pumpkins! I can't wait to see some pics of your decorating results.

I love your crow, and that background is just beautiful, really, really nice.

Have a great day:)

Alice~That's the wool I bought from you. It makes such a great background.
Love your pumpkin story!! LOL!!

Good Morning!
Glad you girls liked my pumpkin story ~ it was sure funny at the time!! And I have to say that Julie gave me the idea to use that particular wool after I saw a rug the she did ~ it makes a great neutral background with a lot of variation!!