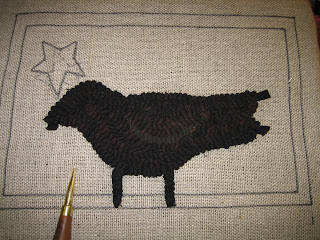 After three weeks, I finally am back to hooking!! This past weekend, I worked on my UFO for the Wool Snippets challenge ~ not a lot but at least a little progress! Last night, I started a small pattern ( 10 x 15 ), which is an enlarged version of one of my starter patterns for beginning rug hookers ~ and it's also a good pattern if you need a small project or gift for someone! The star motif was a little off kilter and had to be moved, so it wasn't something I could offer for sale ~ the next best thing was to hook it myself ~ it can be the example picture to attach to the pattern! The crow wool is a really dark hand-dyed burgundy ~ kind of a black cherry ~ so with all the variation of color and a plain black strip for the wing distinction, it hooked into a nice looking old crow!! There is a nice buttery-feeling, kind of neutral plaid that appears to be a good background wool ~ I'll give it a try tonite! I hooked for about an hour, while watching Dancing with the Stars and will do that again tonite. I miss it when I put the hook down for too long and am trying to put into practice the goal of hooking a little every day!! As with most of my good intentions, it's difficult ~ but it won't happen if I don't give it a try!!

We had a most fun weekend at the lake ~ Friday night, we were left to our own devices, as all of our lake friends were in other places!! We went to Mon Ami winery for the free food at happy hour ~ then went on to a Japanese restaurant and ate in the sushi bar (no sushi for me ~ a lovely lump crab & avocado parfait and a fire-roasted lobster appetizer ~ YUMMY!) ~ Sonny had sushi and sea bass ~ we were quite happy when we left!! Then a stop at some other friends where we watched the debate (sort of) and a stay that was way too long!! We decided that Friday night would be our belated anniversary celebration since Thursday night, we stayed home and ate brussel sprouts, beets and redskin potatoes for our supper ~ that was an event!!

Saturday, Sonny's daughter and two of her girlfriends came up for a night out! We had cosmopolitans on the rocks (you know how we like to rock-sit) and then to Mon Ami for dinner and dancing!!! The old guy and I danced till one in the morning to the Traveling Lounge Lizards!!! We had used a local taxi service for the coming and going and we were so happy to have them pick us up!! The next day, we put the girls in the back seat of the car and drug them around Catawba and Marblehead ~ in and out of shops and showing them the local sights!! It was a fun day and they all had a great time ~ a short weekend without their kids and time with such fun parents!!!! I heard one of them say (I think Sonny's daughter) "they're so cute"!!!! We're cute alright!! At least, we are still able to shake a leg on the dance floor!!

Office work awaits but I just had to post this ~ my 'intention' was to blog every day or so, but it's hard to find the time and the subject matter ~ well, not if I write about every dumb thing we do!! Hope all is well with you! Ta ta for now!
Alice
Posted by Alice ~ Folk Art Primitives at 3:10 PM