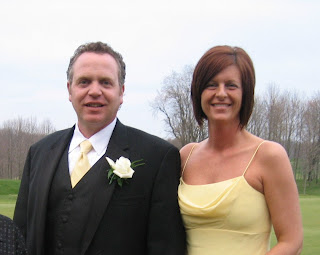 To my son, Teddy!! Yesterday, my youngest son was 40 years old!! Holy crow!! That makes him almost the same age as me!!! This is a picture of Ted and Miki at a wedding they were in recently ~ nice photo!! Teddy spent part of his day in jail ~ poor guy ~ for charity! We have an old prison in Mansfield where several movies have been made and that was where they 'held' local business people till they made their bail ~ and fed them a nice lunch while they were there!! Ted earned $1000 for Muscular Dystrophy ~ so his day was well spent!! Then last night, his little girl, Luci, had her first softball game ~ what a hoot!! After the second inning, she hollered over to her mom "is it over yet?" Funny!! Then we all went out to a local Mexican place for the birthday dinner! As I was my mother's youngest child, she always referred to me as 'the baby' of the family ~ I refrain from doing that most times, but it's a shocker when your 'baby' is 40 years old!!!! It makes it really bad, too, when I say this extra weight I'm carrying is from my last baby!!!!!! That's way too long to use that line!

Have a good day, friends!! The sun is shining here ~ I think I need to go outside!! Alice
Posted by Alice ~ Folk Art Primitives at 11:52 AM

Alice,
How cute, kids say the cutest things. What a lovely couple!!

Oh, Happy Birthday to you son! Wow, what a great picture!