THIS AND THAT and WATERMARKING ~ ~ ~ 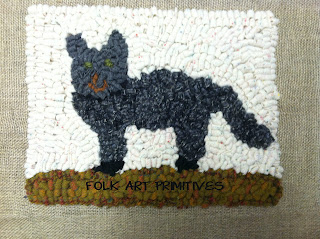 A week or so ago, I posted a picture of my two new rug students, grandsons Luke and Jakob.  Well, Jake's little mat is done ~ Gracie, his cat!  I think he did a fine job and if the cat doesn't look like a cat, it's due to the designer (me)!  But Jake is very proud of his work and so am I!! 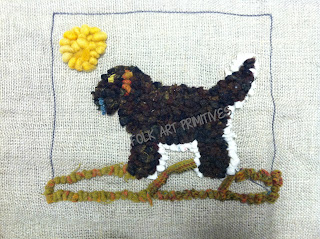 Luke has worked on his little dog mat for a couple of different sessions and I think it is darling!  This time he wanted grass under doggie's feet and a sun!  I thought it was great that he was putting his own creativity into the pattern!!  I wish I would have drawn a pattern instead of right on the linen ~ it's pretty cute!! 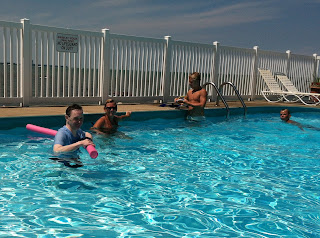 Weekend before last, Sonny's daughter and boys came up for a little r-and-r before Jake's football practice began.  I have to show this picture of Tad in the pool with Korinna, Jake and Camden!  That will be his one time this year, I'm sure!  Tad is pretty much a stay in his room kind of guy and we're always glad when he'll venture out of his comfort zone!! He has a nice sunburn to show for it ~ the shirt didn't last long and the one application of sunscreen didn't do it!!  His 'peach skin' (as he calls it) was a nice shade of pale red!! 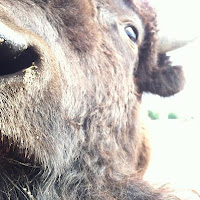 Of course, African Safari was on the agenda!  Jake and Cam hadn't been there and it's my favorite place to go!!  This nice buffalo ended up snorting on my hand and we can only hope it was muddy slobber ~ cause it sent the boys into fits of laughter as to what it could have been!!!  Anyway, a fun weekend was had by all!

Summer is going by way to fast for me!!  Next week is Sauder Rug Week and my finishing class ~ it's getting down to crunch time and you can imagine, I'm in a bit of a crunch!!  Off to the hooking room ~ talk to you soon!

Hope you're having a good summer!!
Alice

P.S. If you notice, I have my business name watermarked on the boys' rug pictures.  Not that anyone would really want to steal my very primitive drawings but I've been wanting to address this for a while.  Recently, I was looking at the photos on one of the rug hooking forums that I belong to and coincidentally, came across one of the bee chair pads from Lori Brechlin's cute pattern.  I thought I would take a closer look to see how the rug hooker had done hers as it looked similar to mine.  When I did a close up on it, I thought 'wow, her hooking is really like mine' ~ then I thought 'wow, this is mine'!!!!!!!  It was a photo from my blog that I had posted before I  actually finished  the rug and I typically leave empty spots around the background if I'm afraid of running out of wool (which I did). Then I  fill in so that it looks more random rather than a chunk of a different wool all in one place.  At any rate, it was obvious that was my rug on her page with her rugs that she hooked.  I  messaged her and told her this was my photo of my rug and gave her the option of acknowledging that this was hooked by me or removing it from her site.  She opted to remove it and said 'I'm sorry'.  It was quite a coincidence that I even saw it, as I don't check the new rug photos very often.  So, grandson Luke, found  a free site (iPiccy.com) and showed me how to watermark.  I'm going to try to use it more often ~ something for all of us to think about!  I notice that more of the rug designers are using watermarks and  when you see so many rugs on Pinterest that don't give credit to the rugmaker, it might prove beneficial there as well!  Let me know what you think!
Posted by Alice ~ Folk Art Primitives at 11:24 AM

Looking forward to seeing you at Sauder!

Thanks for the info on watermark. I went into my Photoshop program and figured out how to do it for pics on my blog.
I am horrified that someone would pass off another person's work as their own!

Alice,
Wishing you all the best at Sauder! Look up my friend Jill Holmes ( NorthwoodsWool) from WI and say Hi!
Watermarking is an excellent idea! I use Lunapic.com also!!
Your designs the boys did are adorable! Simple and sweet! Great job!!
Hugs!
Cathy G

Kris, the gal didn't exactly say she hooked it but it was on her page and when people complimented her on "her" great hooking and colors choices, she said 'thank you'!! Hi Cathy ~ yes, I've bought wool and patterns from Jill before ~ she doesn't know me but I will say hi!!

I think the boys did a fantastic job of hooking; frankly it looks better than my first hooking project when I was an adult. Kudos to the guys!

Thanks for this! Very good idea to use watermarking. Must investigate. If it's easy on Photoshop, that's probably what I'll use, but will checkout the iPiccy site also. Now, if I could do it on my blackberry, that would be so neat! Maybe there's an app for that.
Cheers and happy hooking, Maureen