left the building ~ flown the coop, so to speak ~ ~ ~ taken her turkey babies and gotten the flock out of here!!!!! So sad ~ I was looking forward to watching those babies for a few days ~ but I guess she couldn't stay!! After I posted yesterday, I went out and she had moved them under a Japanese fern ~ then she moved them across the walk underneath the rhubarb plant! Later, when I looked again, there were three big black crows hanging out in the tree above her ~ and around 5 p.m. when I checked, she and her brood were gone!! So it really was a lucky thing that I was home yesterday and could get some pictures and see what all this egg sitting produced or I would have missed it entirely. Thanks Mrs. Turkey for giving us some entertainment for a few weeks ~ it was fun! 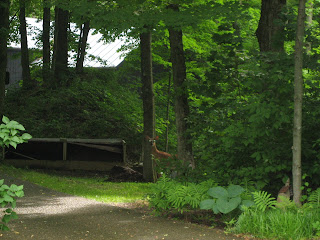 And one of those times that I was going to check, I walked around the garage to get a better shot of them under the rhubarb ~ and there by the compost boxes was MS. DEER!! Lucky I had the camera turned on and she posed politely and I got this nice shot of her ~ we were about 25 feet apart! It's pretty darned interesting living in these woods ~ we are in town but it's like being in another world! We are so fortunate to be in this place!

It seems like I should do some hooking ~ I'll have nothing to blog about now ~ except maybe all the little league games this week ~ last week, there was only one or two since it rained. This week there is one or two every night ~ I don't know if it means as much to all the little grandpeople as it does us, but we're there!! Hopefully, we're creating memories for them! I didn't have grandparents as I grew up and I always envied my friends who did ~ I guess I'm trying to be the grandparent that I wished I had!!

Okay ~ I'm off and running ~ have a good evening!
Alice
Posted by Alice ~ Folk Art Primitives at 3:13 PM

Hello Alice, just sent you a quick email, but I wanted to let your other readers know that I received your sweet giveaway and it's just wonderful~thank you sooo much Alice!

What a beautiful back yard. We have all open area, then trees around us, so it is private at least.

Great pictures of both the deer and the turkeys yesterday. The babies sure were cute.