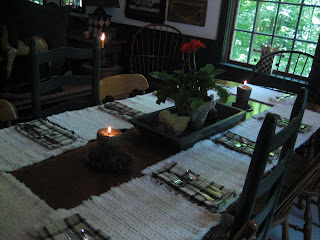 I'm back to blogging ~ life gets incredibly busy and complicated here ~ yikes!! This is a picture of the dining table for the Red Hat group that came for lunch last week ~ once again, something I threw together at the last moment- the centerpiece, not the lunch!!! This beautiful gerbera daisy was outside in the sunshine so I threw it in a pot, put it in the wooden tray, and put two pincushions made of mohair on either side ~ it made no sense but it helped balance out the tray ~ the candles were in my show stock and since I had FORGOTTEN to buy the tealights that I ordinarily set at each table setting, I had to grab these two big candles, put them on some little tin plates and adorn them with rosehips ~ it worked out swell ~ I think candlelight adds a lot to a table! 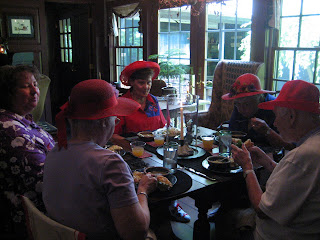 I told all these girls to look for themselves on my blog ~ so here you are, ladies!! Pauline (in the red and purple shirt) brought her group from Willard to spend the day lunching and touring our house and gardens! They were very complimentary ~ they made my day!! Pauline's sister sits for my son, Tad, and she offered to be my helper that day as well as my friend, Vivian ~ and believe me I need all the help I can get!! Before they arrived, I dumped the contents of my waterpik all over the bathroom counter and I got in a bit of a hurry when making coffee in the big coffee maker and turned the darn thing on before I put the water in!!!!! Smoke rolled out from underneath it and the bottom of the empty pot was sizzling!! I thought the day was not off to such a swell start!! 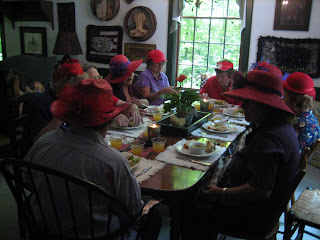 Nothing like pictures of a bunch of women eating but I want to show them all so no one feels left out!! The two I did leave out were my helpers ~ holy crow ~ next time, girls!! Lunch was a familiar menu of potato-leek soup, chicken salad on croissants, frosted apricot jello salad, rosemary lemonade and black forest cake!! I can cook up a storm sometimes!! Sometimes, not!! 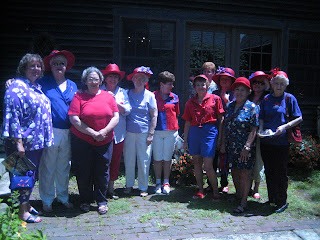 So ~ all's well that ends well ~ some of the gals had to leave before the "photo shoot" ~ but they all had a wonderful time and I enjoyed them a lot!! They want to come back at Christmas!! What could be a nicer testimonial than that?!

Saturday, there was a local hook-in ~ very fun ~ the next post will be about that!! Have a good day and thanks for stopping by!!
Posted by Alice ~ Folk Art Primitives at 12:09 PM

Alice~I was beginning to worry about you! Your table looks lovely!
Your menu sounds yummy! The pictures of the red hat ladies...looks like they had a grand time! You sound like me when I am having company~yikes is right!
Thank you for your sweet comment on my blog! Warm summer blessings friend~Kathy

Alice ~
Welcome back to blogland. I missed you ;-)
Looks like the Red Hat ladies had fun. What better place to have fun than with you?
Pug hugs ~
Lauren

Alice looks like a ton of fun! Love the tablescape! :o)