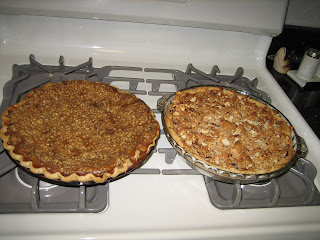 Here are the old guy's pies made from scratch!  One had a streusel topping and the other was a coconut and almond topping ~ both pretty good!  I'm not sure the kids liked them but Grampa and I are enjoying the heck out of the leftovers this week!
Teddy and family came up to the lake Wednesday and left Friday ~ we had lots to eat and a fun game of charades on Thursday night!  It's fun when the kids are old enough to participate in such things ~ it was actually their idea and we had some laughs for sure!!!  My impression of a turkey definitely made my daughter-in-law laugh a lot! 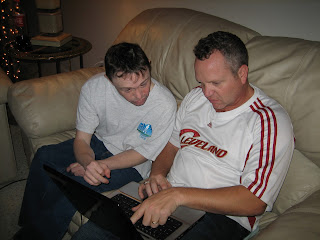 These guys are my oldest and my youngest sons having a little bonding time ~ a picture that warms this  mother's heart!  Tad , the oldest and the smaller one of the two, stays to himself a lot but Teddy had something to offer him that even got Tad's attention ~ his computer!  Ted showed him how to look up things on YouTube ~ he loves music videos and honestly, the kid spent the entire afternoon and evening sitting at the table looking up the names of singers he likes.  Tad can read and spell  enough to enjoy books and magazines about television and movies, etc. ~ he loves the entertainment industry a lot!  The kids suggested getting him a Notebook for Christmas and it sounds swell to me.  I never thought of it before and it will help fill Tad's time ~ I hope he doesn't set up a Facebook page!!  For those of you who are newer readers, my oldest son, Tad, has Down's Syndrome ~ he's 45 ~ he lives with us and is very functional and says "I love my life"!  What could be better! 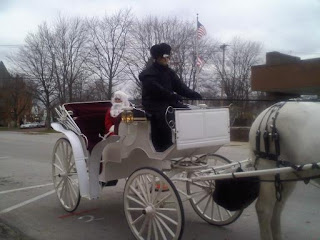 Saturday, Sonny and I went to Pemberville for the Christmas celebration ~ saw Santa riding along on the carriage rides!  Last year, when we took Luke, Santa wasn't riding ~ so that was fun ~ seeing Santa always warms my heart ~ I still believe ~ do you? 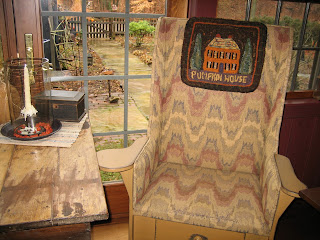 Just a quick picture of the Pumpkin House rug ~ I attached it to the back of this chair in the kitchen -keeping room.  I decided I like it so much that I wanted to see it all the time ~ it looks good there, me thinks!  FromMeToThee asked on a previous post about hooking hurting our wrists ~ I don't have that problem but I know it's often suggested to use more than one hook ~ alternate between the two and to give your hand a rest.  I hope that never happens to me ~ I love to hook ~ although, I haven't done much lately!
That's it for today ~ I am going to post a recipe ~ and then I'm off for some errand running!  Ta ta for now!
Alice
Posted by Alice ~ Folk Art Primitives at 2:02 PM

Hi Alice,
Of course I still believe in the jolly old fella. Your thanksgiving weekend sounds fun and those pies are making my mouth water.
A notebook for Tad is a great idea. I think he will really enjoy surfing the web.
I would have enjoyed seeing your turkey impression too. lol

I love the carriage so pretty and who does not believe in santa???
We are a game playing family and can't wait to get together to play pictonary. Your son is sweet I work with a young lady in her 30's who is has down's she lives in her own apartment with supports in place and I support her in her job at the book store. She corrects me often in the job and usually she is right. a note book would be a wonderful thing.

Alice ~
Of course I believe!!!
I bet a notebook would be a great gift for Tad. How wonderful to hear that he loves his life. More people need to be like him!
Hugs :)
Lauren

Hi Alice! Looks like you and your family had a lovely Thanksgiving. I think those pies look absolutely scrumptious! Also, how clever to attach your rug to the chair.
xo
Dulcy

*****concerning the problem with hands and wrists. the only time this occurs is if you are hooking incorrectly. the hook is not being held properly and the mechanical action is incorrect...in other words the larger the strip the hook should be held in the palm, not like a pencil. the other problem is that when the material is brought to the surface of the foundation it MUST be rolled in the direction of the last loop. the rolling motion is from the fingers...NOT the entire wrist.
of course, the proper hook for the proper size of the strip helps, but not necessary to use different hooks. i've been hooking for thirty eight years and never have had a problem because i palm the hook. hope this helps.
p.s...i'm also a physician so i can
back up the medical-mechanical aspect of this technique. thanks for a great blog!

*****just another thought...if your child of 45 with down's says
he loves his life...this is truly
from having a loving set of parents and siblings. very impressive in this day and age, so
congratulations to you!!! teach him to hook...it will certainly help his motor skills, like the rest of us, as he ages.

Thanks everybody for such positive comments ~ bloggers live for feedback!
"Newburyarts" ~ thanks especially for the kind words about Tad ~ I do my best to see that he is happy and healthy ~ I was 19 when he was born so we've kind of grown up together!! I also appreciate your insight into proper hooking style ~ I do 'palm' my hook and maybe that's why I don't have a hurting wrist ~ but I didn't know that would be the reason!
And to "Acorn Hollow" Cathy ~ how wonderful to be a support person to your client ~ these kids are smart, in their own way. Tad has such a great memory for dates, and TV trivia ~ it's uncanny sometimes!!


This article is interesting and useful