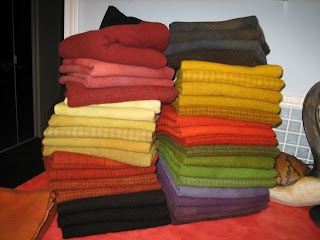 Here's my dying efforts for this week!  It takes me forever to dye wool ~ I see others that dye this and more in one day!  I work it in between office work and life and this week, I got a couple of shipments of wool, so I was washing, drying, cutting and folding most every day!!  I used Jacquard dyes on three of these ~ straight from the bottle!  The bright gold, orange and the black.  I also tried an antique black using Cushing's black and it always goes blue ~ it makes me furious!!  One of these days, I'll figure it out!!  Does anyone know if you can mix Cushing and Jacquard dyes or any others, for that matter?  I would appreciate your input!

I want to address the comment I made regarding 'junk wool' for lettering!  I really do appreciate all the comments that you left on the Pumpkin House rug ~ it really is a cute little piece!  The orange wool that I used first was a nice hand-dyed wool ~ definitely not junk ~ and then I had to pull it out because it didn't show up.  Somewhere, I have read that you use wool you ordinarily wouldn't hook with for the letters, pull it out  after the background is in and re-hook them ~ evidently others of you have heard that, as well.  They show up and stand up better!  Then you don't mind pitching the wool that was reverse hooked ~ like I minded pulling out that nice dyed orange!  One of my commenters, Newburyarts, suggested doubling a strip to get the latter to stand up ~ that is probably a good idea but my issue was the color didn't stand out as much as I thought it needed to!  Thanks for all the kind words!

I'm almost ready for my class tomorrow ~ always a few things to do ~ but I'll be ready when my gals arrive!  I'm baking a sweet treat for them to have with coffee when they arrive and quiche for lunch ~ hope it's good ~ sometimes it can get scary here in my kitchen!!!!!   If any of you are reading that are coming tomorrow, hang on to your hats!!!!!

I wanted to tell you about my darling Mr. Kitty!  He has a new trick!  He loves my jewelry so much that I can't really let it lay out on the dresser, so I put it in the small drawers that are part of the dresser top.  Well ~ now the little beast has figured out how to OPEN the drawers!!!!!  He uses his paws like little hands and pulls them right open!!!!  I kept finding the drawers open so I thought I was forgetting to close them ~ Sonny saw them open while I was gone last week and thought I'd just left them that way!!!  Now, the culprit does it right while we're watching ~ he loves bling just like me!  My fear is that he'll scoop something out of there and carry it away, never to be seen again!  I told Sonny that I thought duct tape was in order!!!!!  Should I use it on the drawer or use it on the cat?

ALice, the wool is divine. Love that antique blue/black....that will sell. Enjoy your class....wish I could be there. Maria

I've taken a few dye classes, but can't recall that mixing dye brands is a good way to go. Dharma Trading might be able to answer your dye questions though. I'd call their main number on their website rather than the physical store in San Rafael.

Alice, that wool is beautiful!I love how your pumpkin house rug turned out! The letters are perfect! Oh, how I wish I were one of the lucky girls coming to your class today! Best wishes for a fun day! (I know it will be!) sending hugs~Kathy

beautiful colors! I hate to dye because I dye for a certain color and it never comes out like I wanted it to. I have even tried that premixed dye colors that someone is doing. I am not sure if my water has a weird chemical compound. have a great class
Cathy

Alice you wool looks great! One talented cat you have. :)

*****the trick to the antique black is to use less black dye. the cushing black dye has too much blue, as you have found out, so increase the brown or the khaki drab in your formula. not all antique black formulas have any black in them at all. rememeber it is an "illusion" of the faded black that should be a part of the
true primitive look that people want to obtain.

*****as for my comment on the use of double wool...depends on how you want the letters to look. subtle or pronounced. each artist has his/her own thoughts, and personally i liked the subtle approach that
you originally started with. another trick in hooking letters is the same as hooking a circle, hook the loops a bit closer together, especially on the curves,
to obtain a true representation of the letter. again, beautiful rug and your choices of colors are
lovely.

Oooooh yummmmmm!! LOVE that wool, Alice!!! Have a wonderful time!

*****in reference to the question from acorn hollow...yes, we both live in the northeast and dyeing wool with the water is a problem. try using bottled water from the grocery or walmart. the cheapest one available and this will help the dye process produce a truer color. all of the acid in our water, plus the added chemicals according to your town's needs hamper the end results. good luck!

I just love the colors of your wool Alice. I am sure that you are going to come home with empty hands!

You can mix the different dyes from different companies. I do it all the time with great results.
They are all acid dyes so there should not be a problem.
Now I need to touch that wool of yours!!!!LOL

Alice, I love your wool. Dyeing is something I've never been interested in trying. Why dye when I can buy?

Your Mr. Kitty story brought back a great memory. Many years ago, when my parents were still alive, they were here for a visit. I had warned my mother NOT to leave her watch, earrings, etc. out as our cats loved to play with this stuff. Well, my mother didn't listen and our most beloved Blue Point Siamese, Squeegee, came running from the guest room through the living room with my mother's partial bridge in his mouth!!!!! My mother never forgave him, or me, for that matter (since I was laughing hysterically!) for this.

Being a "kittymomma" to five cats, nothing in our household is left out where the cats can run off with it! We've even had a ripe tomato disappear from the kitchen counter and turn up under the guest room bed....with nary a punture hole or split in it. Never figured out how Cinnamon managed to pull that one off.

Thank you for dredging up a great memory or two!

Alice,
What gorgeous wool! You do a great job on all your dyeing. When will we hear how Barb Carroll's class was this year? I would love to take from her some day. Just need to get it together and make it to a camp.

ALice ~
Your wool is lovely. I want to come touch it too.
My BFF somehow dropped her 4 carat tennis bracelet and it was missing for many months and she eventually found it under the bed is a spare room. She is sure the kitty was the culprit.
I'm sure your class was a great success!
Hugs :)
Lauren

I'm drooling all over my keyboard looking at your wool! lol
Your cat is very talented and has good taste. We used to have a dog many many years ago who would open the cupboards looking for treats.

Wow, that is just a beautiful picture with all the dyed wool. I can't even imagine doing all that dying. Do you do it in your washing machine or in a tub?
Are you sure its the kitty and not your house elves playing in the jewelry box. Things disappear here all the time and show up in the strangest places. I don't have any kitties so it must be my house elves or my sweet 90 lb lap puppy named Phoebe which I seriously doubt. I just love the beautiful colors of your wool.

Hi Alice, what a picture of wool. I love it. Hope you are having a relaxing day today! I would think you need it after the workshop. I hope it was a great success. Now I want to try to dye some wool. One more thing to get into. Oh no. I am looking forward to Friday eventhough I am nervous. Have a great day.

Your dye bounty is beautiful. And I'm with you - I have to fit it in among other things, so am not very prolific in the dye dept.

I think your kitty is part racoon - at least the intelligence and Inspector Gadget arms part. I think you had best give him his own jewellery drawer, though I fear he will not be fooled by that for long LOL.

Your wools look luscious....especially those greens....greens are always my faves!
As for mixing dyes together....go for it! That's how you'll get some of your most "one of a kind" colors!

ALICE! I am so GLAD TO KNOW that it takes someone else forever to dye all that wool!I am in the very same boat these days!YOU have inspired me to get organized and hurry up !THANK YOU!!!

I definitely love this site.