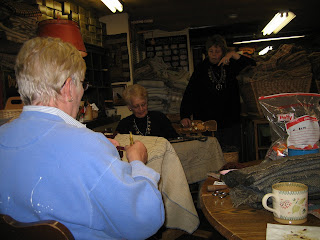 You guys are so nice to write or email and wonder what happened to me ~ thanks a bunch!!! What a life, people!! We went to Barb Carroll's Sunday, November 2, right after the From Our Hands show ~ five of us hooking and eating for 3 1/2 days ~ a great time was had by all! Here are a couple of pix ~ this one is Barb checking in on Gloria, who was hooking up a storm and that's the back of my friend, Mary ~ we made great partners in crime at cocktail time!!!! 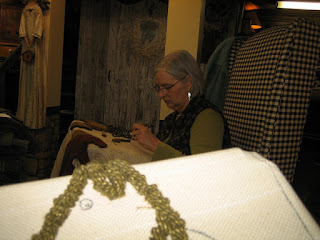 And Donna was so serious about her hooking ~ right then anyway!! She was so kind to put this motley crew together and then put up with us ~ at least some of us!! We got a lot of hooking done ~ a lot of eating (the food is so good in Ligonier) ~ and lots of laughing!! Of course, it was election night on Tuesday and the Carroll's let us stay later than usual so we could watch the results ~ it made for lively conversation to say the least!! 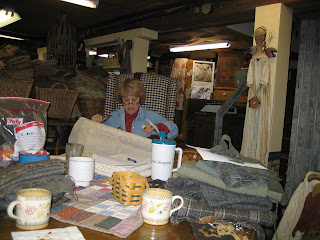 Judy was into her rug at this point ~ she was our driver for the week ~ and we sure did run her around! Actually, she likes to drive and is ready to go anywhere her little band of travelers suggested! And those girls can sure shop ~ they made some interesting purchases and boosted the economy in Ligonier! 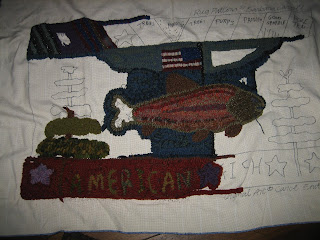 My project for the week ~ AMERICAN FISH ~ one of Barb's patterns. I took that and another one along ~ I couldn't decide ~ also took along a stash of sparkly wools that I had accumulated from Barb over the course of time ~ and a stash of paisleys. All of a sudden, the choice was made ~ almost more by the wool and paisleys then anything else! So Barb and I were off and running ~ and she added a couple more sparklies that she had squirreled away!

The body of the fish is entirely paisley ~ each stripe a different one ~ and outlined in a gold sparkle herringbone. What you see in the picture is what I got done in the three days we were there ~ I haven't hooked a loop since we returned home. It is going to be fabulous ~ when I go to Barb's, I like to take something that is challenging for me ~ color planning doesn't come easily to me and as I get more creative and kind of 'out there', I like to think that Barb and I work on that aspect of it together very well.

The day we left, I started sneezing and carrying on, and by the time we got back, I was really sick ~ and I still kind of have the remnants of what was a nasty cold. Then on Sunday, when we returned from a short weekend at the lake, the computer monitor had croaked ~ and with a little help from my friend (Sonny), the computer itself lost an important part, while he was unhooking all the cords to go to see the Geek Squad at Best Buy. After much consultation with a nice young man at the store, we determined that we shouldn't put money into a four-year old computer, so we bought a new one. That was the easy part ~ getting everything transferred onto it was the nightmare part!! After two trips back to the store and three of their Geek Squad guys working their magic and two long sessions on the phone and online with two nice men in India ~ they got the old girl up and running ~ well, not me, of course ~ the computer!!!! Transferring the accounting programs and data and the virus protection stuff truly was a nightmarish adventure for me. My head still hurts from all the instructions and right-clicking on this and that ~ BUT it's over now ~ and I'm able to email, blog, and account ~ life is good!!

My Seattle son is home this week to bow hunt with his brother ~ tonite they came out of the woods and came home ~ I don't realize how much I miss him until I see him. We talk and email often, so it doesn't seem like he's so far away ~ but when I see his smiling face, it really hits me. I fixed a dinner of white chicken chili, salad and a nice bread and took it to my son's house (my daughter-in-law worked all day so I tried to help her out) ~ then the kids could go to bed and we all had a crazy evening of everybody talking (Sonny's son and wife dropped by, too) ~ it always makes me wonder who's listening if we're all talking!! Tad even went over, too ~ he's always glad to see his brother. The hunters head back to the woods in the early morning and then Chris will head for the airport tomorrow night ~ no deer yet ~ maybe tomorrow!

So, here I am again ~ back to blogging ~ which, by the way, I missed terribly. Even my husband said 'your readers will think you died since you haven't blogged in so long' ~ I was actually surprised that he knew that ~ I didn't know he kept up with it ~ funny, hm? Tomorrow morning, I'm driving to Columbus for an early appointment and then we'll head to the lake late afternoon. Saturday, we're going to Indiana for my friend, Gwen's mom's 80th birthday!! I've known her since I was 13 years old ~ so I don't want to miss that celebration!! Happy trails, everybody!
Alice
Posted by Alice ~ Folk Art Primitives at 11:08 PM

If you hadn't updated by today, I was going to email you too. Normally, when someone drops off the face of the earth, I sit back and wait for a while, thinking that they're sick or maybe they're having the week from hell, like I've had.

But Alice, I've missed your blogging so much! My mornings just aren't the same without you. I'm glad you're feeling better (I'm trying desperately to avoid all of the germs out there) and that you're able to "compute" again.

I hope you have a wonderful weekend and can finish getting rid of that nasty cold.

Although I am relatively new to this "blogging thing",I too have missed this little "peek" into your life! So nice that you were able to spend some time with your "out of town son", I can relate having a daughter (and two grandchildren several states away). Enjoy your weekend and feel better! Kathy

Glad you're back! Love reading about your life and family!

It's nice to be missed ~ thank you so much for stopping by!!
Alice

Oh.....How I wished I could have been there. Thanks for sharing the details though....next year! Maria

We missed Maria, too ~ so glad she's back online!!!