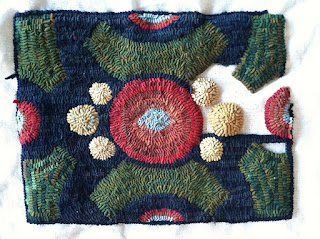 Tipp City rug progress ~ wish I would get it finished!!  I took this photo with the cell phone in  a lot of bright light ~ yikes!!  But it's coming along! 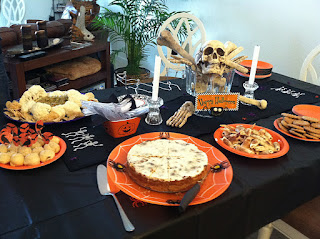 This weekend, Sonny's son Chris and family came up to the lake and we were invited to Karen and John's (next door neighbors) for their annual Halloween lunch!  They go to great extent to make it fun and tasty ~ there was pizza, chicken tettrazini and lots of appetizers and bags of goodies for the kids and even for the ladies!  Very fun!! 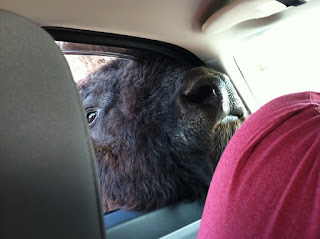 Then we took the kids and their parents to African Safari ~ one of my favorite places to go up there!  You drive your car thru and feed the animals!!  This buffalo liked Chris a lot ~ but he needed a tic tac or two ~ whew! Some of those guys had really odoriferous mouths!!  We laughed so hard ~ it's just crazy when these animals stick their whole heads in your car and snarf around for food!  We took four bags of carrots and they give you a cup of pellets which don't last long and usually the animals yank it out of your hand!!  Chris is a very meticulous fellow and he about had the big one when they slobbered on his car ~ that was almost as funny as the wildlife!  We went directly to the car wash when we left!  That night, we went to the Japanese restaurant, Nagoya, for dinner ~ always fun with the kids!! 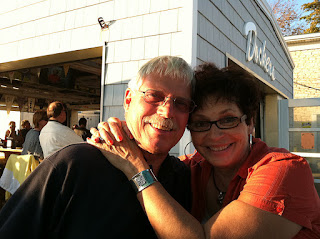 Two weeks ago, we went to Kelleys' Island with our friends ~ this was at one of the pubs along the way ~ we were pretty happy by this time and I'm shocked at how big my arm looked that day!! 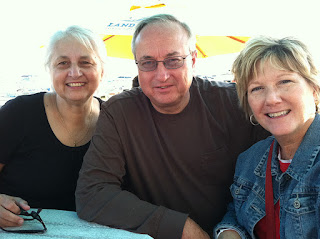 Our partners in crime ~ Carol and John and Karen (our Halloween hosts)! 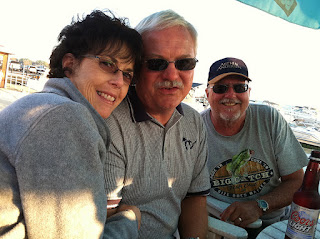 Diane and Greg and Bill ~ Carol's husband!!  We had a riot that day!  Went to the annual Chili Cookoff at the Brew Pub and met up with our friends, Tom and Janet, who live on the island part time!  Always lots of laughs ~ we love our friends!!!

It's been quite a couple of weeks ~ lots going on!  Yesterday, I bought a new phone system and got that into operation ~ I'm not the sharpest tool in the shed when it comes to these new fandangled pieces of equipment!!  I also bought a new printer because the current one has a broken hinge (how, we don't know but it wouldn't print unless I laid on the top of it and now it won't even do that!)  Tonight's project is for me to try to get the new one up and running!  Wish me luck!  I had to hand write paychecks today ~ that's not good ~ and then will have to print them to paper so the guys can have a copy!!  And on it goes ~
I did it!!  I have the fax set up and the printer connected to the Ethernet so it's wireless!!  Woo hoo!!  I have to say ~ the tutorial was so good that probably my cat could have done it!!  But, there is no less sense of accomplishment!!!

Anyone watching Dancing with the Stars?  It's getting a little dicey with tempers flaring a bit!  Okay ~ I'm outta here for now!!  See you soon!
Alice
Posted by Alice ~ Folk Art Primitives at 8:31 PM

The picture of you and Sonny is really good! We've done the safari drive too, I thought the car was going to get a big dent in it by the time we got out of there. It is alot of laughs!!

Alice ~
Love that pic of the buffalo trying to stick its head in the car. Great fun. I haven't been there in decades. I need to take the grand.
Hugs :)
Lauren

Congrats on figuring out the electronics. I always feel like a genius when I don't have to ask a teen to help me hook something up! LOL

That is amazing that the buffalo stuck his head in the car!! Kinda freaky too! Great pics, thanks for posting!

Alice,
Congrats on tying all those electronics together. I have trouble using my wireless Kindle and have just a basic phone from Consumer Cellular. I rarely use it and with my AARP discount, it is a real deal. Now they even have smart phones.

Glad that Chaz got what he deserved and was kicked to the curb. Hope Max's ego doesn't get him booted off the show next season. He is one of the reasons I watch DWTS.

I cannot believe someone would take a mat from you!!!! I hope it just got picked up, in error!!!! Let's hope the person is honest and tries to find out where it originally came from.

Oh boy, don't those Buffalo stink to high heaven? They are magnificent looking creatures but are enjoyed best at a distance. Great pictures of everyoe and looks like it was a lot of fun.