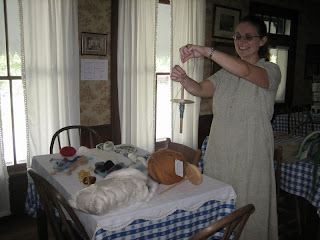 Saturday, a week ago, my hooking friend, MJ and I took a class on spinning yarn with the drop spindle!  It was great fun ~ always love learning something new ~ and Janet Engle was a great teacher!  There were only three of us ~ a gal named Chris was there as well and we all got very personal attention! 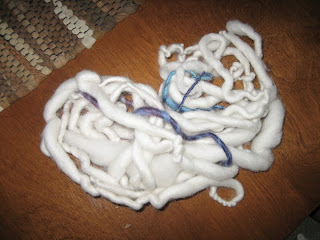 This lovely, lumpy skein of yarn was the rewards of my labor!  We start out with about a yarn of wool roving (on the table in the photo above) ~ split that into threes ~ attach it to a piece of yarn that has been looped around the dowel underneath the disc ~ run it thru the hook on the top and spin away!!  There's a little more to it ~ for me, lumpy bumpy yarn with a lot of texture will work fine ~ Chris had a very even tension as she spun and hers came out pretty darn perfect!!  I spun a little blue roving into the white just to see what the finished product would look like!  My intention is just to do a little handspun yarn to hook into a project ~ I'm not going to spin enough to knit a sweater or anything even close ~ just a little to say that I added my own handspun to a rug!! 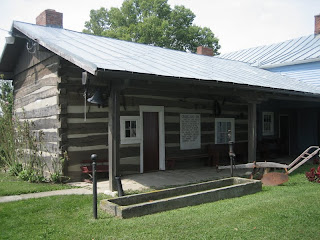 The class was at the Overland Inn, which is located in McCutcheonville, Ohio ~ south of Fremont and Tiffin.  Janet taught the class and since she is also a docent, gave us a wonderful tour of the old inn.  This log cabin is at the back and is the original part of the building. 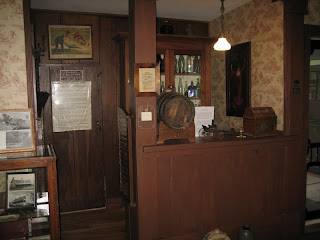 Everything has been restored and this is the reception area/bar of the old inn.  It has quite an interesting history and Janet was well versed in the stories of the past! 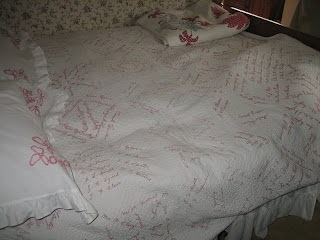 There was lots to look at ~ this signature quilt done in the old redwork was very interesting to me. Very small and refined stitches made up the design and you could tell it had been washed many times thru the years. 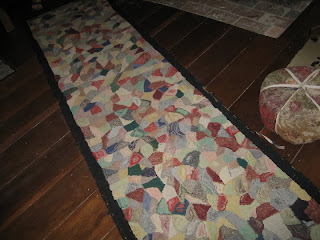 In an upstairs bedroom, there are beautiful old handhooked rugs.  Janet didn't realize that's what they were, so we enlightened her with what we knew about them!  I love this runner ~ obviously, done with scraps of colors ~ very worn but almost a faded painting look to it. 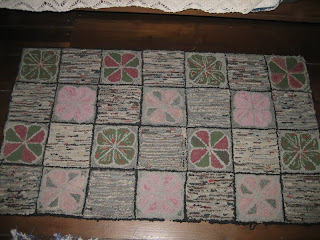 All the rugs and furnishings in this room had been donated by a local family well known in the area. 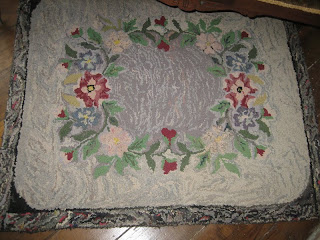 I love the striated background and center and the unusual border treatment.  Something to ponder for those of you who are rug hookers! 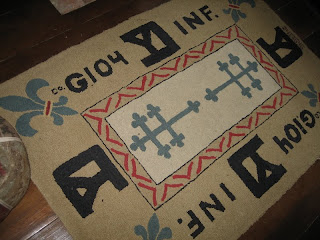 This rug was in perfect condition ~ it definitely hadn't been used.  It was hooked in honor of the man's military service, whose family donated all of this.  Janet said she would try to see that the rugs were moved out of the traffic pattern of the room, as this one was.  The color is still very good in this rug. 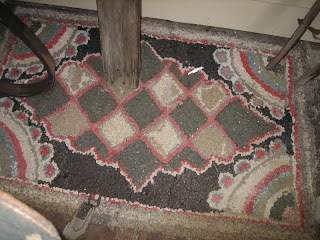 There is another building on the property that had been a store and had lots of antique tools, etc. in there ~ not yet really organized but still fun to look at.  In the corner, MJ spotted this rug, which is quite good looking ~ Janet was going to make sure it got out of the corner and put somewhere where it could be enjoyed!!
My thanks to MJ for finding this class for us ~ we had such an interesting day ~ and it's possible that I may teach some rug classes there in the spring ~ we shall see what comes of it! 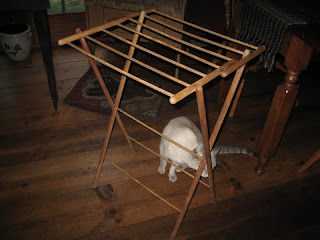 We went to the antique show at Lakeside on Saturday morning ~ usually, there are lots of primitives but not this year.  I did find this cute little old drying rack, though ~ and it will be perfect for displaying my marbleized wool so customers can see all the great variation of color!!  It was a big $8 ~ I got off really cheap at that show ~ Sonny was glad!  There was a beautiful Bride's Box that really took my eye but at $350, I decided to admire it from afar.  I'm guessing that was probably not a bad price for it ~ it was beautiful and the color and condition were very good.  At this stage of life, we don't need to be adding to our stuff, for sure!!
What we do need to do is have fun ~ and we sure had that this weekend!  Friday night, we went for dinner with some of our lake friends and their out of town friends ~ sat on the water at Dock's Beach House and had a cocktail ~ it was great!  Saturday, we had friends, Kathy & Kenny come up and 12 of us went to Put-in-Bay for the day!  We started out at Heineman's Winery and went from there!  Of course, we got split up ~ that's a lot of folks to keep together ~ and just laughed and had fun all day!  We took the ferry out of Catawba Island and on the way back, we surely saw some sights!  One little gal travelling in her teeny black bikini, with her two well-oiled travelling companions ~ and the one was trying to get "teeny's"  dress on her to cover her up ~ we had some laughs over that, for sure!!  Lots of other funny things ~ but what happens on the island, stays on the island!!  Not really, but I can always find something to laugh at!
So ~ back to reality!  Going to put the dye pots on ~ I dyed some very vibrant colors last week ~ pictures in the next post!!
A belated Happy Birthday to my friend, Diane ~ with all the hilarity, I forgot to get her a card ~ but we wished her happy birthday many times over the weekend!!!
Did I tell you the story of how last week, on Wednesday, Sonny mentioned how we had been together 29 years tomorrow?  My eyes got big as saucers and I said " I CAN'T believe I forgot our anniversary and I must be losing it, etc."!!  The next morning, there's a beautiful card waiting for me and I apologized again and thought, I've got to run to the store and get him a card before he gets home!  I called him during the day and said again "Happy Anniversary" and blah blah.  Then I was Facebooking my niece for her birthday and thought " I can't believe I never got it that her birthday and our anniversary is the same day"  And then I thought ~ that's because it's NOT!!!!!!  Our anniversary is in September ~ NOT August ~ and he was so sure (and proud of himself the he remembered)  that he had me convinced, too!!!!   I swear ~ we laughed so hard ~ Mr. Romantic said "put the card back in the envelope and save it till next month"!!!!!!  We are quite a pair ~ seems like we might not have one good brain between us!!!!!!
Have a good week, people!!  We're going to!!  In fact, I saw a great quote the other day ~ think about it ~
Have a Good Day ~ Unless You've Made Other Plans!!!!!!
Alice
Posted by Alice ~ Folk Art Primitives at 1:32 PM

Just about fell off my chair with the Anniversary story. LOL

That is too cute Alice!! Goes to show how the days and months just blend into each other when you're having such a good time!! At least you know you'll be getting a card this year from Hubby!! LOL!
Enjoyed seeing the drop spinning and the historical cabin! Oh those hooked rugs are fabulous and glad you were able to educate them as far as preserving them!
Great post!
Cathy G

Another great post full of fun and funniness! I so enjoy your stories Alice!(:

Oh gosh the card story is so funny!!! Sounds like something that I would happen to me!!

Alice, your Anniversary story takes the cake. I love it. Too funny. I'm getting forgetful too as I grow older. I even forget the grand kids' birthday but they always remind me, lol...

I've never spun with a drop spindle but my daughter and granddaughter are expert at it.

Thanks for showing us the old rugs. I'm glad that you enlightened the lady on preserving these old treasures. JB

I love your anniversary story. That is definitely something I'd do! What great rugs you found at that Inn. I have to laugh at your drop spindle spinning. It looks like mine. It does get away from you, doesn't it? I gave some of mine to one of my students who was mad for weaving. He loved it! Have fun!

Wow, Alice, that's a heck of an update. Whew, I need to refresh my tea, lol. Love the pics of the rugs. I love the faded paint one too. It's lovely. Grats on your new acquisition, and um, wow. You and your hubby should have celebrated twice, lol. That would have been great!!

Alice.... That's a great anniversary story! And I love your little tour with all the rugs and restoration. Also, your spun yarn came out lovely, and I'm sure you'll be putting it to good use. Thanks for dropping by, I'm better just from taking a little field trip to your blog!

I was admiring the rugs in the above post, they reminded me of the ones that my grandfather had made.