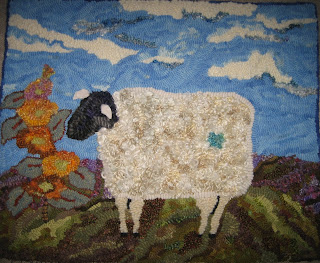 Isn't he the cutest? My friend, Heidi, hooked this great looking rug! She started it last August in Heather Ritchie's class at Sauder Village! Heidi has been wanting to 'step out of the box' with her rug hooking and this is a wonderful start! She used lots of beautiful yarns in the hills, real sheep fleece for the sheep and roving in the clouds ~ the pattern is one of mine that I sell but Heidi added the clouds and flowers ~ job well done, Heidi!! The pattern is roughly 20 x 24 and it sells for $48.00 if anyone would like to hook this cute sheep! 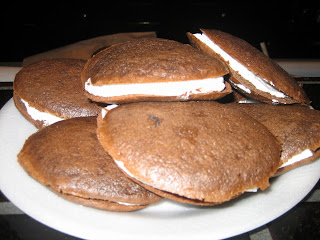 Whoopie pies!! Have you ever made them? Luke emailed yesterday that he wanted to take whoopie pies to school Monday and his mom (bless her heart) suggested that I would probably love to do that with him!! So Luke came over today and we made a batch ~ he needed 30 pies ~ our batch made 29!!!!!!!! So we made a second batch! We made whoopie pies for nearly 4 hours!!!!!! But there were some left for us, some for them ~ and I heard he was passing them out in their neighborhood this evening!! He sent me a really nice email thank you note ~ so it was worth it!!! I used to make these for my boys when they were little and it's been a long time in between then and now!

On Friday and Saturday, I went to Columbus ~ both days ~ to the primitive wholesale markets ~ my friend, Vivian went with me Friday! Vivian made arrangements for us to meet her husband after we were through, so they could go do something fun down there. We were chatting away and got on 71 to head home and were clear out to Polaris when she reminded me, we were supposed to be somewhere else!!!! What a riot ~ we had to get off the interstate, take some back roads that she knew ~ and finally met up with Lou ~ who knew no different!! It was pretty funny ~ aggravating ~ but funny!

We saw a lot of people we know at the two markets we attended Friday ~ from years of doing shows, we both know a lot of the vendors! I used to really buy a lot to fill out my booth at shows but since I sell mostly rug hooking, I just pick up a little this and that. But I so love to go to the markets ~ they just have an energy of their own that I thrive on!

This morning, before we baked ~ I went over to a rental that's getting a new renter and washed woodwork, windows and oiled the cabinets! Fun! Yesterday I did the same to a house we (Sonny and his son) are rehabbing for sale ~ I scrubbed down the stairway and oiled it so it has a new lustre! Just call me Dora Domestic ~ for all those that know me, I'm sure they're enjoying this!! Tomorrow, I have to pick out light fixtures for the rehab house ~ lights are really hard ~ I'm not so crazy about what's out there for sale right now! My only contribution has been picking out things ~ carpet, floors, countertops, etc. This house was left in horrid condition by a tenant and has taken many hours and much money to put back in livable condition ~ it is hard to believe that people can take such poor care of someone else's property ~ it is just one of many issues that made last year one for the books!!

Three months into 2010, we are approaching this year with lots of positive thought and promise. We are open to all the abundance the universe has to offer and as good fortune comes our way, I will be sharing that with you!!!! One of those things is that our hooking frames are really flying out the door ~ thanks in particular to a couple of friends, who are spreading the word and the new rug students that are coming my way! I love rug hooking and sharing that through teaching! Now, if I could just get that tax prep out of the way, it will be smooth sailing ahead!! With the nice weather, the gardens are needing lots of attention ~ and a show to get ready for in April ~ whew! I gotta go now!! Ta ta!
Posted by Alice ~ Folk Art Primitives at 6:39 PM

I am a rug hooker and have just found your site. The last thing I hooked was a rug for my daughter's wedding a year and 1/2 ago. I have a large rug on my frame right now and pull a few loops now and then but I do not have the excitement I had. I really love hooked rugs and
need to get that old excitement back. Thanks for letting me see your wonderful rugs and Maybe I will get back to it.

Alice ~
Your last few days have made me tired. I think I need a nap.
What a good grandma making whooie pies with Luke. He's lucky to have such a special grandma!
Pug hugs :)
Lauren

First,great job Heidi! Second, Hello dear Alice! You sound as busy as ever..and fun abounds as always! Those whoppie pies look wonderful..mmmm! Please take me with you the next time you go to the market!! (: My friend and I have done the very same thing..busy talking and forget where we are going! lol! I'm so happy that things are going so well for you dear friend! hugs~Kathy

Alice, I just love to read your blog! There's always something going on! Now down here in the Ozarks we eat a little Whoopie Pie now and then, but I've never heard of a receipe for them! Would you want to share? I certainly will understand if you don't--that's OK. They sure look good. I bet Luke had a ball! Love, Jeanne

Alice,
I hope you enjoyed your birthday! Now I'll always remember your birthday too!
Those whoopie pies look de-lish....have never tried making them, but I think it might be fun to give it a whirl one day!