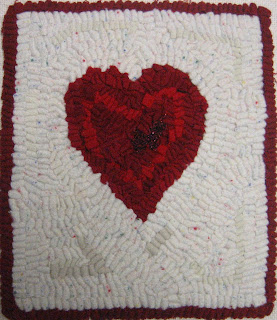 Done by my little grandpeople!! Over the holidays, the Seattle grandchildren wanted to hook and I was very happy to have that happen. Haylee, who is 11, started this hooking this heart FOUR years ago when they were here at Christmas! Two years ago (they come every other Christmas), she worked on it about 5 minutes and was done! This year, the day they left, she decided she would finish her heart! They do the motif and I hook the background and finish it and will send them on their way! 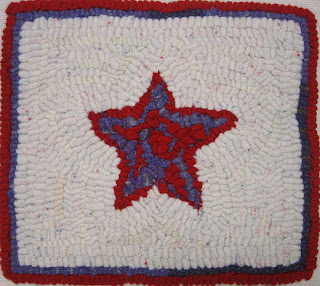 Hunter, on that last day, decided he wanted to hook! This star was started by grandson, Luke, in '08 and didn't make much progress so I told Hunter to have at it!! When Luke figures out this is his star, I'm guessing I'll have some 'splainin' to do, but I had no time to draw something new!! I really think they do a nice job for beginners ~ it's fun having them share my artistic interests! 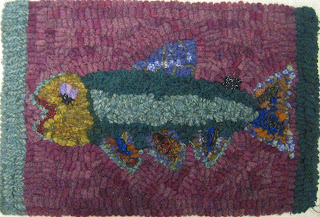 Eight year old Hannah is the one who would really be my hooking buddy if she lived nearby ~ she did a great job on this fish and spent a lot of time in the hooking room over the holidays! I copied the fish from a painting that older sister, Haylee, had done last year and Hannah picked her own colors. I love this little mat ~ Hannah wants to give it to Haylee for her birthday in March ~ isn't that sweet? I did hook the head and eye for her but she did all the body and fins and really worked hard at it. Next time, I'm going to draw on linen as she really struggled with the threads that make up the monks cloth. Two years ago, she hooked a star and did just a grand job for a 6 year old. I'll label each of them with all the details and hopefully, they'll have them through the years and remember hooking with their Bobo!

Since I last posted, I've covered a lot of ground! Friday morning, I drove to Columbus to the Heritage wholesale market ~ didn't find a lot but did get a nice piece of paisley! My friend, Vivian, went along and we did a little shopping and had a nice lunch ~ she made me promise we'd go to lunch!!! Friday night, we went to a party at our friend Rita's ~ a shared birthday party for Sonny and our friend, Ken. Saturday morning, I drove to Columbus for a different wholesale market ~ again, not too much there for me but the January shows are smaller. I like to add pieces of folk art to my booth to have something that appeals to those that aren't into rug hooking ~ I'm sure I'll find some things at the March shows!! I met Sonny for lunch on the way home ~ he was at the tool show in Columbus that morning.

That night, we had his six brothers and their wives for our annual get together ~ kind of a brothers' bonding time! I started pork and sauerkraut on Friday since I was going to be gone most of the day on Saturday, with the thought that it could finish cooking after we got home. Sonny boy put it in the oven at 2:30 and when I got home, it didn't look like it would be ready by 6 ~ so I jacked up the over to 500 degrees ~ I love to cook on high and hot! By 5:30 things weren't looking a lot better and the kitchen was hotter than Hades ~ so I ran to Subway and bought some subs to feed them until the pork was ready!! As it was, we didn't eat till 7:30 as some of them came later ~ I had taken the lid off the pan so the juices would cook down ~ therefore the pork roast was harder than a hockey puck on top - one of the brothers said he thought he was gonna break a tooth!! What a fiasco!! In the end, it actually was all very good ~ the subs, too ~ but it about made me crazy!! The sister-in-laws all bring food and for a while I thought it was pork and pies ~ we had at least 6 of them ~ all yummy!

In the midst of all that, Sonny found our freezer in the basement unthawing ~ that was a nice topper to the day! So, he bought a new freezer on Sunday (I stayed out of it!). He decided to clean the coffee pot when he got home ~ it was running too slow ~ that worked out swell ~ after he was finished the damn thing didn't work at all!!!!!!!! Yesterday, I bought a new coffee pot ~ wonder what else is getting ready to roll over and play dead!!! I hope it's not me!

Last night we went to a 5th grade band concert ~ Luke & Jakob were playing the saxophone and trumpet. It was really pretty good ~ it's amazing what these kids learn in a few short months ~ we get to go to another one in April! And believe it or not, I went back to Columbus today to the car dealership and squeezed in a trip to Whole Foods ~ I love that store!!! I brought home lots of good things to feast on!

Tomorrow I'm home all day ~ thank goodness ~ and then to the lake for the weekend to celebrate the old guy's birthday!! Ta ta for now ~ hope you're having a good week!

What a whirlwind you have been in!!! With the exception of broken appliances... it's all good though! ;-) I adore your grandchildren's hooking!!! They are all fantastic! That little fishy has some seriously sassy personality! :-) I love it! Hugs to you!

Hi Alice,
Your little ones did a wonderful job on their hooked mats. The fish is too cute!
I guess by now the dead appliances have had a proper funeral. LOL!!! My DH loves to try to 'fix' things and they usually end up in the junk heap after all his efforts.

Happy Birthday to your DH!!! Have a great weekend celebrating.

Hi Alice - your schedule is a whirlwind! Love the children's hooking. I understand your plight - my coffee pot, vegetable steamer and hand vac just died - got old like me! This to shall pass!!!!!!

Beautiful little rugs. All your grandchildren have talent but little Hannah seems to have a real creative flair.

Alice ~
Just love the grandkids' rugs. They are just too sweet ~ especially the fish.
Your comment about rolling over and playing dead is just too funny. Who else but Alice would think of that?
Have fun at the lake and birthday wishes to Sonny.
Pug hugs :)
Lauren

Hi Alice,
Why does everything break down at once? Your young un's hookin' is pretty darn precious! Better encourage them to keep on! Happy B-day to your Hubby. Thanks for sharing bits of your life, makes mine seem pretty unexciting! Cathy G

awww..the grandchildren's pieces are so sweet Alice! I seriously love the fish..so folky, don't you think?! I smiled again at your dinner story!(: That's how it goes..always more than one thing to replace at a time! ugh! Your trips to Columbus sounded like so much fun! Please extend to Sonny Happy Birthday wishes and many more!
Have fun! (and I know you will!!)

Hi Alice...You had me laughing at all the "adventures" in your life!! Isn't that always the way - everything going wacko at once! LOL
Love the grandkids' hooking! And hope you and Sonny have a great time celebrating his birthday! (Perhaps not having the pork for dinner this time...hmmm?) LOL
Hugs, Sunnie : )

Thanks everybody for appreciating my little rug hookers' work ~ I thought it was just me cause I'm the grandma!!! I'm going to make a pattern out of Haylee's fish drawing ~ it really is cute! I have all of them bound but one and then they're on the way to Seattle!! Thanks, again!

Wonderful! I LOVE that you have your grandchildren hooking! Do you put them on your frame, or do they use hoops? My grandson is enthralled by it when he's here (six years old). I let him pull loops. I hooked a western horse rug for his room a few years ago, but now he wants an Iron Man room. Oh dear...any Iron Man patterns out there?

In answer to Dulcy's question, I put their patterns on my small frames ~ initially, I stretched Hannah's on my frame and the poor little soul couldn't get her arms underneath it to hold her strip!! Duh, grandma!! The smaller lap frames work great!