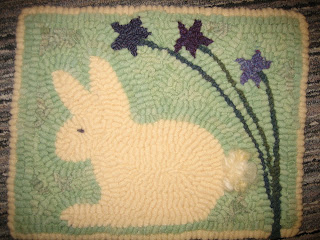 First of all, this is the little mat that I designed and hooked for my friend's daughter!! They were at the lake this weekend so she finally got her shower gift a month later than the shower but it was BEFORE the baby!!! Pretty good for me! The lighting probably wasn't the best but you get the idea ~ they don't know if baby is a boy or a girl, so a rabbit will suit either ~ I used a some lambs fleece for the tail ~ I hope they like it!! 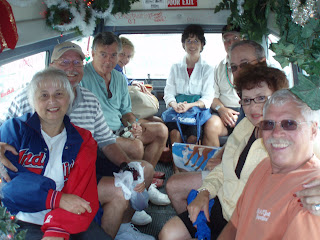 This is our motley crew riding in Dapper Dan's decorated bus from the ferry landing into the town of Put-in-Bay!! He was quite a character and made the ride fun! Everybody was looking at him taking our picture but me ~ I was looking at his ~ parrot!!!! 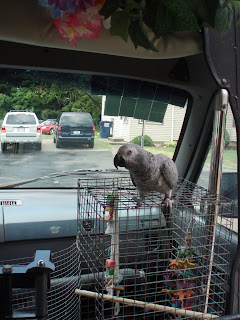 Scarlet rides shotgun on top of her cage in the front of the van ~ she talks a little but we are all so loud we barely heard her ~ she whistled and said 'cockatoo' and took the tips in her beak at the end of the ride!! Pretty entertaining way to start our travels on the island! We did have a fun day ~ went to two wineries, a couple of pool bars (bystanders only-oh, the sights we see!), the Boardwalk for food and libations, and then danced at the Beer Barrel to Wally and the Beavs!! And we were on the 8 p.m. ferry back home!!!!!! The only crisis of the day was that our friend lost his BlackBerry (of all things) and that caused a little chaos ~ for him ~ we all drank wine until he felt calm ~ or maybe he just looked calm to us!! We decided we might be getting old ~ no one was nominated for the Village Idiot Award and we were home before dark!!! I guess it could have been worse!!

The last two days, I have been dying wool and curly fleece!! I've not done the fleece before and it's turning out pretty good ~ I like to use dyed fleece as accents in a rug ~ maybe flowers, or grass or hair ~ I did that on my England Memory Rug. In September, I have two shows back to back so I thought maybe I should get on the band wagon and get started so I'm not so rushed!!! The colors are really nice ~ I'll show pictures later this week!!

It's 7:30 and we haven't had supper yet ~ all vegetarian tonite ~ broccoli from my stepson's garden, cucumber-tomato salad and corn on the cob!! Sounds healthy ~ wish it would make me skinny!! Guess I need to eat this way more than a few days a week!! Have a good evening and I'll post in a day or two!
Alice
Posted by Alice ~ Folk Art Primitives at 6:58 PM

The bunny rug/mat is so cute.
Enjoy your week

Alice, this sounds like so much fun. Love your bunny rug.