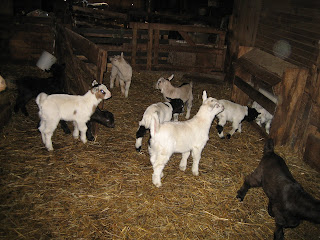 Sonny's brother, Mike, has a small farm with sheep and goats! When he told us they had 50 babies out there ~ 22 kids and 38 lambs ~ we decided we would gather all our little people and head to the farm on Sunday afternoon. Grandpa called ahead and told them to dress warm, picked up all 6 in our small car, brought them here and then in two cars, we went to Uncle Mike's!! 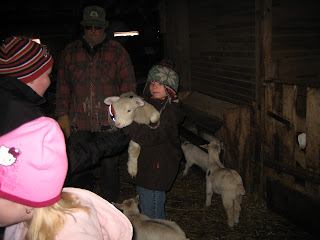 Camden is holding a baby lamb ~ they put that in with the goat kids because it's mother had no milk ~ so some of the mother goats let it nurse so it wouldn't starve! It was so hungry ~ it absolutely attacked one of it's substitute mothers while the kids were in the pen! 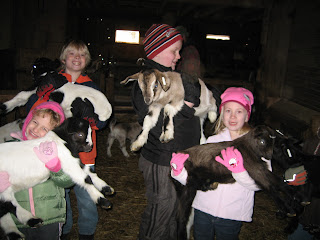 Luci, Jakob, Luke & Jordyn all were so happy to hold those baby goats!! Logan, who is 4, didn't want to hold or touch them ~ he was a little intimidated by all those critters! 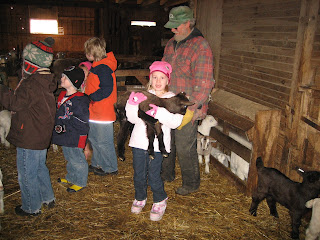 Jordyn was really happy with her little black goat ~ they already have little horns sprouting out of their heads!! I didn't get a shot of all the sheep and their lambs ~ they were at the back of the barn and there was bunch of them all baa-ing and carrying on. Mike didn't think it was wise to put all the kids in the sheep pens!!! All the lambs have numbers painted on their backs to match their mother's numbers so Mike knows who belongs to who!! 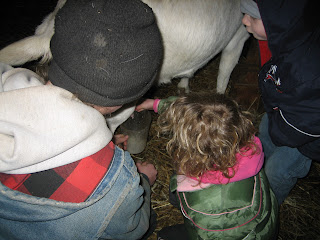 And the really BIG DEAL was that all the kids (except for Logan ~ he wasn't touching those things!) got to milk a goat!! They were pretty interested in that process!! Uncle Mike then fed the milk to the barn cats ~ one of which scratched my wrist because I thought it would be such a nice kitty to hold!! Yeah, right!! I hope I don't get cat-scratch fever now ~ when Sonny's brother seemed concerned because of all the "bacteria in the barn" ~ then I began to worry!! I came home and used my favorite home remedies ~ peroxide and Neosporin!! And I am keeping an eye on it!! 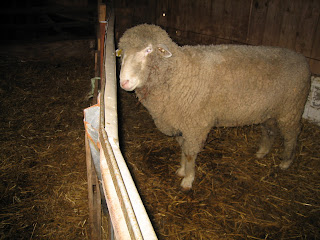 This nice big guy is the father of ALL the lambs ~ you would think he'd look happier!!!!!!!!!
Our afternoon at the farm over ~ everyone was frozen ~ it's cold here in Ohio again ~ we packed the little duffers back in the vehicles and came back to our house. Some of them tramped around the woods, the girls came in and made their own paper dolls ~ 6 year old Jordyn suggested that ~ she drew a doll on paper, we cut them out and they 'dressed' them with colored markers and stickers and my very favorite ~ glitter paint!! Wish I had taken a picture ~ they did a really nice job!! They played Blokus with Grandpa and then we ordered pizza and subs!! A good time was had by all and by 8 p.m. they were back in their homes!! It was fun ~ I wish the Seattle kids could be here to share in that kind of hilarity!! Back to reality this week and hopefully some hooking! Have a good week!
Alice
Posted by Alice ~ Folk Art Primitives at 10:27 AM

What a wonderful day, Alice! I wish I could have gone with you because that's "right up my alley." I would have been in the pens with the kids, holding all of the little goats and lambs, wanting to take at least one of them home with me.

As for that kitty, okay, I freely admit that I'd come home all scratched up too because I'd be holding and kissing each and every kitty I could get hold of.

In my experience, I don't think you've got too much to worry about with cat scratch fever. That's not to say that you shouldn't keep an eye on it. But if you keep it cleaned up and medicated, you should be okay. It's a cat BITE that's so very dangerous. By the time you realize something's wrong with a cat bite, you can end up losing a finger or a hand. Very bad stuff, those cat bites.

If you ever get a cat bite, run, do not walk, to your doctor or local ER.

But oh, what a wonderful day you had with the grandkids. That's what memories are made of. I know most of my best memories are of time spent on my aunt and uncles' farm when I was growing up.

OH MY GOSH! Alice, there is ABSOLUTELY nothing cuter than a baby goat...and I should know! LOL! I wish I could have been there too. I would have picked up each and every one of them and kissed their sweet little heads. I am so goat-addicted!
Kris

JoJo ~ I hope we're making memories for them ~ I hope it means something when they're grown up ~ it means a lot to us, I know!!
And Kris ~ I dearly loved those little babies ~ I kept telling them how sweet they were and Mike laughed at me ~ that's his bread and butter so he doesn't get attached!! I would love to have a little goat for a pet!!!