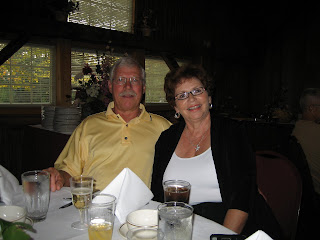 What a weekend!! It took me until yesterday to recover!! We really did have a good time but between being one of the planners and hosting our own party Friday night, it was a really big deal!! As I said before, we were a small class so on Friday night at our condo, there were twelve of us, including a couple from China and one from Alabama! The van dropped them at our condo at 6:15 and picked them back up at 1:45 a.m.!!! We ate, we laughed, we drank adult beverages!! The lobster chowder went over very well ~ whew! I worry when trying out a new recipe! I've had several requests for the Pecan Bar recipe and have tried to figure out how to have a link to it here but so far, this techno-impaired brain doesn't get it!! So, if you would like to have it, email me at gfraizer@neo.rr.com and I will send it along. They were pretty darned scrumptious ~ I took the leftovers to my neighbors on Sunday evening (they had guests from Venezuela!) and they all liked them very much!!

At our Saturday gathering at the lodge, I proposed a "65th birthday party" in 2010 as most of us will turn 65 sometime during that year. I borrowed the idea from my husband's class and our group latched onto it and ran with it! My thought was to have it at our home on a Saturday ~ no frills ~ maybe I would cook, maybe they would bring food, maybe we would have it catered ~ and for sure a birthday cake!! By the end of the weekend, they decided they would bring their motor homes, campers (someone suggested tents - not good) and spend the weekend!! So there we have it ~ another big party!! It works for us and we're looking forward to it!! As you can tell, a good time was had by all at our 45th reunion including the nice couple in the above picture!!

Last night I went with a friend, to a spiritualist church about an hour from here. The church people serve a great dinner for $4 and then have a 'message service'. The 'messages' come through the pastor from the 'spirits' on the 'other side' that are guiding us or want to contact us!! I had been there with her quite a few years ago and interestingly enough, one of messages that I received last night and the time before, was that there is a nursing vibration all around me, sending energy thru me! My mom was a nurse and both times, that is the first thing that is mentioned!!! Spooky, huh?! And I have an Indian guide who says to let my mind be open to overall wellness and that I have a sense of direction in my life!! Isn't that wonderful news??!! Since I plan on living a long time, that made me pretty happy! It was a fun evening ~ a person can take from it what appeals to them and leave the rest there ~ one recurring theme was that we each own our own happiness!!! Pretty profound, wouldn't you say?? We don't need a spirit to tell us that!

I'm trying to catch up on office work, laundry, etc. It's a beautiful day here in Ohio ~ maybe the garden is calling me!! Oh, I almost forgot ~ today is our 26th Anniversary ~ we exchanged cards this morning and both of them had stars on them ~ I wonder if we're becoming just alike ~ scary!!
Have a good day!
Alice
Posted by Alice ~ Folk Art Primitives at 10:30 AM

Yes, Miss Julie ~ Ashley!! Everyday is great!! Most of them, anyway!!
Alice

Alice, belated Happy Anniversary greetings to you and your husband. Sorry ~~~ I haven't been on the computer much this past week. Too many other things (like Cricket) demanding my attention.

Your reunion sounds like it was a blast! I've never been to any of my HS reunions...never really interested. But yours sounds fun!! Hope you're having a good weekend.