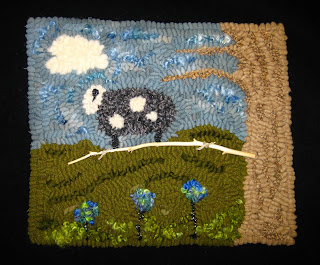 That's the name of this Blog Challenge # 3  ~ and it's done ~ fini ~ completed!!  I couldn't be happier ~ late Sunday afternoon, I decided I better get this under way since I had to have  the post about it done before we leave on our vacation!  Yesterday, I wasn't thrilled with the way it was progressing but by the time it was finished this evening, it was looking very good to me! 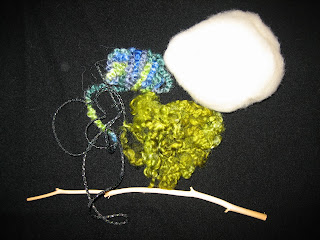 To refresh your memory as to materials ~ the roving in the picture was used for the circles in the sheep and for the big fluffy cloud in the sky.  I stripped it out into skinnier pieces of the length and hooked it right into the foundation fabric first, before I hooked anything around it!

The same with the curly yarn ~ that's the three flowers at the bottom and the sparkly craft thread makes up the flower stems!  All the limey green dyed curly fleece is at the bottom of the rug also ~ it looks like nice curly grass to me ~ enhancing the countryside!

And last, but not least ~ the TWIG which became the "limb"  ~ Out On A Limb ~ yes, that little sheep definitely is!  I hooked the tree in a light, natural color to complement the twig, laid the twig on the bare linen, traced it with a Sharpie pen and hooked in a temporary row to follow that drawn-in line.  Then, I hooked it with some junk wool and hooked all around it with the green hill wool ~ after the mat was done, I pulled out the hooking and laid the twig into that space and anchored with some linen twine!  It's not looking too bad, if I say so myself ~ and I do!!  To get a closer look, double click on the photo and you can see the rug in detail!

When I opened the box of bits and pieces that Kris Miller sent, the idea came to me pretty quickly ~ it was just putting the idea into wool, that was a bit tricky for me ~ but it worked!  Check out the Ali Strebel's  and Maria Barton's blogs on the 20th and see what they came up with ~ I can't wait myself!!!

Today is Sunday, February 20th and I'm posting from sunny Englewood, Florida!!  The weather has been spectacular for the entire 9 days we've been here ~ as if it were custom ordered!!  We've had the most fun ~ that's for another post ~ and I had a great time at the Searsport hook-in in Sarasota!  That's another post, too!  I met up with Tammy of Skip to My Ewe blog and Tere ~ a Wool Snippets rug forum friend ~ and my friend MJ saw that I got there ~ it was fun for her, too, as she was able to hook up with some Florida hookers!!  How many people can say that with a straight face?!!  We're heading home to winter in Ohio tomorrow ~ I think our wonderful friends and hosts, Diane and Greg, will be glad to get back to their schedule ~ they have taken us hither and yon to some very fun places!!  Talk to you soon!!
Posted by Alice ~ Folk Art Primitives at 12:43 AM

WE leave for florida next Sat I sure hope the weather holds for when we get there. Maybe some day I will get to do the sarasota class with searsport.
I love your lamb and cute idea out on a limb. have a safe trip back
Cathy

Alice ~
Your little rug is just too cute!
Some advice ~ DON'T COME BACK TO OHIO TOMORROW!!! It is cold and snowy and sleety and just plain yucky!
Hugs :)
Lauren

Another great challenge piece. I love the sheep on a limb. When I saw the supplies, I thought of a birds nest.
Glad you had good weather and a nice time with all those hookers!

What a clever idea, Alice! You really did a great job and I'm really impressed with such creativity.

You won't want to come back to Ohio tomorrow, if it's anything like Michigan...cold, snowy, icy, YUCK! The driving is terrible. I think you'll wish you were back in Florida.

Primitives By The Light of The Moon said...

Cute Idea!!!
Love what you've done with the challenge materials!
Take advantage of that lovely Florida weather and have a wonderful time. Lauren is right! The weather's YUCKY!!!

Love your rug. Think it's my favorite of this challenge but then I am a sucker for a rug with sheep!

I will accept your thanks for ensuring you had beautiful weather during your trip. This is the lull we have before the freezer door opens again and we are bundling up.

You are always welcome here in Florida so I do hope you and your sweetie come back again!

Love this little rug, especially as it could be an optical illusion, created by viewpoint! Has been fun to check out the 3 finished pieces! You all did a great job, and wow were the results different... :)

How creative! What a cute job you did!
Karen

Thank goodness for those twigs we find all over the lawn each spring! Liked your rug.

Hi Alice! I've had the hardest time lately getting on your blog. I know it's my computer because it's been extremely slow lately, but for some reason it really backs up when I try to check in with you. So.... that's why you haven't heard from me, even though I've been thinking of you. I'm so happy you got to meet Tammy at the Searsport hook in. She's such a doll and a good friend. I adore your challenge rug, and love how you incorporated the roving into your rug! Gee... Florida.... would love to be there now, but spring will soon be upon us (hopefully).
xo
dulcy

Late to the party again! But loving your little piece. I think this is such a great way to stretch yourself and I'm sure when you get the package, you have no idea where you will end up. Congrats on the creative process and the final result. Fantastic.

Alice, thanks for your comment on my blog. I appreciate even the tiniest of comments. I would love to meet all my followers some day Wouldn't that be a hoot.
I love what you created with the challenge material. It absolutely adorable. You are very creative.
Have a great vacation and I hope that the weather will be nice. They are announcing another 10 inches of snow for tomorrow for us. Gees... JB

Alice, your rug is adorable! You are so creative! Hope you are having lots of fun in the sun! (:
Safe travels back home!
hugs~Kathy