BLOG CHALLENGE AND OTHER STUFF ~ ~ ~ 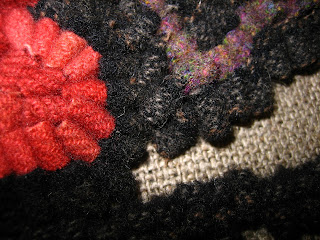 So sad to say ~ but I just started my project YESTERDAY!!!!!  They're due to be published on Thursday!! I think it's an illness ~ procrastination ~ it's a curse, for sure!!  But here's a bit of it ~ there's actually much more done than this!  I got carried away, which is dumb when the deadline is looming so close!  I got out a piece of linen ~ drew some lines on it for center ~ and then drew some other stuff on it and away I went!  I woke up two nights in a row thinking about this and figured out I better get moving ~ and then it ends up being out of hand!!  Thursday's the day ~ stop by and see what we've done!  I read on Kris's blog that she was starting hers, too ~ maybe Maria and the other Alice are already done! 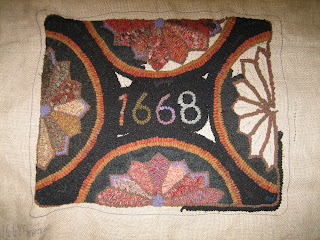 Here's the progress on my 1668 rug. It's coming along slowly ~ but coming along. The good news is the collection of orange paisleys showed up all by themselves ~ I didn't even have to look!  I had put them in one of the cubicles that holds my wool stash ~ they were right there waiting for me!  Woo hoo! 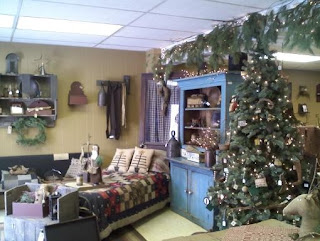 The Keeping Room is a primitive shop in Galion that I went to in December with friend, Vivian and new friend, MJ.  I've done shows with Cherie but this is the first time I had been to her cute little shop! 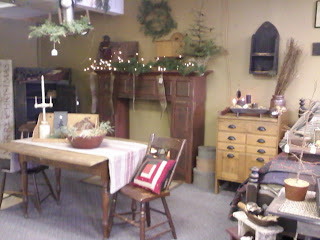 There are antiques and reproductions and Cherie makes a lot of things herself.  She had her sewing machine set up on the counter and was working away ~ no idle hands for her! If you're in the area, stop by and visit her sometime ~ come visit my hooking studio, too ~ make a little field trip out of it!  That's what I call it when friends and I go out for the day ~ a field trip ~ like when we were in school!

The other day Heidi and I made arrangements to go to the International  Quilt Festival that will be held in Cincinnati the end of April!  We're very excited because this is the first time it's come to Ohio ~ usually, only Houston and big cities!!  So, there you have it ~ Heidi and I are going on a 'field trip'!!

Okay ~ I'm off and running!  Tax day ~ sympathy cards to send (too many) ~ and straighten the hooking room for a customer who's coming this afternoon!!  We'll talk later!! Ta ta!!!
Alice
Posted by Alice ~ Folk Art Primitives at 10:02 AM

Alice ~
You work so well under pressure I'm sure your finish will be stunnning!
Love the 1668 rug!
I'll have to check out the Keeping Room one of these days.
Hope all is well in your little corner of Ohio :)
Hugs,
Lauren

Hi Alice,
It's certainly a crazy life isn't it! I know you wouldn't want it any other way! LOL I love the 1668 rug!!! I am waiting to see that challenge...... nothing like putting a little pressure on a girl! Bravo to all four of you girls for even taking on this challenge with your schedules!
Stay safe and warm!
Cathy G

I love reading about other procrastinators! lol Can't wait to see the results from this blog challenge. Last months was great.

The 1668 rug is so cool! The paisley is perfect for this rug.
Good luck getting the challenge rug finished. You can do it!!!

Well Alice, I think you will do wonderfully. Don't worry. There is plenty of time left. hehe. I love the pictures from the keeping room. I just might have to head out your way this spring. I hope you have wonderful luck today and that your hands will accomplish even more than you hoped. Lisa

I have no doubt your rug will be done in time! ;o) 1668 is looking great! And I completely forgot the quilt festival isn't in Chicago. Cinci! Wooohoo!