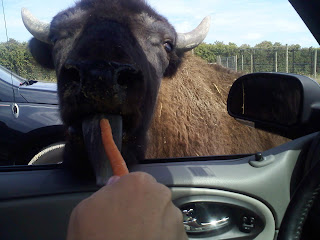 And I mean WILD!!! Son, Teddy and his wife, Miki and Luke & Luci came up to the lake for a couple of days. I have been dying to go to African Safari Park, outside of Port Clinton, and I finally talked somebody into it! It was great! This buffalo was having a little munchie right out of Ted's hand ~ he was one of many ~ there were buffalo everywhere! We ran into someone from home that Ted and Sonny knew and his wife had a picture on her camera of the car in front of them, entirely SURROUNDED by buffalo!! Wondered what those people were thinking? 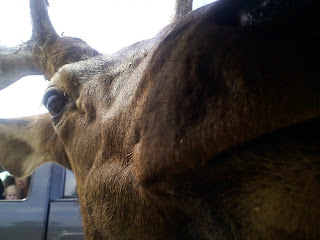 This guy, I believe was a moose! Up close and personal!! I was so flustered I could barely get a picture ~ I had forgotten my camera but the cell phone captured these guys pretty well! Honestly, when there were these big drooling, slobbery mammoth heads hanging in the window ~ it was a little unnerving! It's a wonder the animals aren't fat ~ there were so many cars going thru and when we left, they were lined up out to the road! A very popular tourist attraction to say the least! 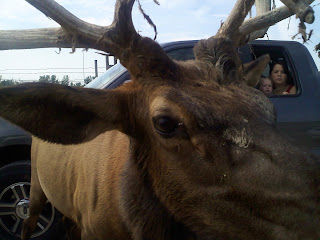 Same guy ~ just a little more perspective!! Look at the people in the truck next to us ~ that little boy was in awe ~ as were the people in our backseat!! Grandpa Sonny tried to get out of this little jaunt but we buckled him in and away we went! He had as much fun as the rest of us!! Luci screamed at every new head in the window and poor Luke had his share of slobbery faces hanging in his rear window! Miki kindly let me ride shotgun with Teddy, so she remained unscathed sitting in the middle of the backseat!! 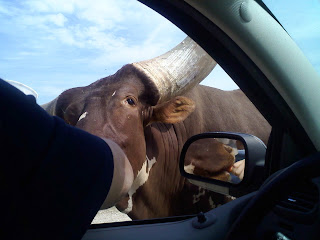 Teddy wanted to feed this BigHorn steer from afar ~ his horns were ENORMOUS and kind of the grazed the car in front of us!! They were pretty imposing figures as they lumbered toward their next snack! Which, by the way, the park made a fortune on ~ the snacks! They give you a container of pellets and we could buy bags of carrots ~ lots of carrots!! We'll take our own next time but if you don't have food ~ ta ta ~ they're on to the next car! 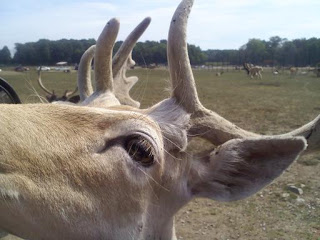 This white deer was pretty tame compared to all those big critters ~ there were lots and lots of deer for sure! At the end, there were giraffes and zebras but all behind big fences ~ not nearly as much fun ~ but beautiful to look at ~ a giraffe is pretty darned tall and Luci observed "look at the knees on that one"!! We laughed a lot and Miki's car looked like it had been thru a war zone ~ inside and out! I was going to vacuum for her but time got away from us!! If you're in the area of Port Clinton and Marblehead, you really should take a carload of your nearest and dearest and visit African Safari ~ it was hysterical ~ and who couldn't use a good laugh and some family bonding these days??!!

On Friday night, we went to the French restaurant in Vermillion to their lounge Touche' ~ that was fun!! Pomegranate martinis and artichokes with alouette cheese for an appetizer!! Then on to Quaker Steak and Lube for wings!! We know how to dine, don't we?! Saturday afternoon, before the kids arrived, we had a Clean out the Fridge party! We had so many odd bottles of beer, wine coolers, and wine ~ so we hauled it all out on the neighbor's patio and they brought out what they had and we all made appetizers! Sonny made his stuffed jalapeno's and we had a little feast ~ pretty darn good! We grazed all afternoon and then in the evening, they started a fire in John's firepit and we roasted hotdogs for our late night snack! The kids liked that a lot and the next night, Karen was in charge of making pies over the fire! That was a first for me, since I wasn't a Girl Scout or a camper ~ they were yummy, too! So it was a fun-filled weekend ~ last weekend of summer ~ hard to believe that we're heading into Fall already!!

Today, I'm back in the dye pots ~ blogging ~ writing some checks ~ and trying to see how much I can accomplish for my show on Saturday!! Hope you all had a fun weekend ~
Alice
Posted by Alice ~ Folk Art Primitives at 11:53 AM

Alice,
We've taken our kids through there. What a HOOT!! My MIL's car was a mess by the time we got out of there. LOL!! See you at Quail Crest!!

I'm so jealous! I've been meaning to go all summer but haven't. Looks like a great time!

Alice! I was smiling just reading the title of your post! lol! I love visiting your blog! Sounds like you had a wonderful weekend! I hope your show is a huge success!
Blessings friend~Kathy

Alice ~
A wild weekend for a wild woman! Looks like you had a ball. I was there decades ago ~ I should take my grandson.
Hope to see you Saturday at Quailcrest.
Pug hugs :)
Lauren

Alice, you weren't kidding.Wild Weekend!
I wonder if I can get up there to this show at Wooster too! I know I am coming next weekend.
If I come, I'll say Hi.
Linda