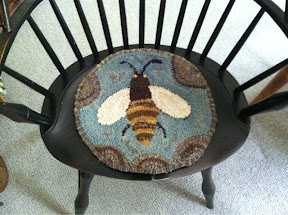 Finally finished! It really did turn out so cute! Lori Brechlin is the designer and the pattern is sold through SpruceRidge Studios, Kris Miller.  When reading Lori's blog post about her chair pad, she mentioned that she used homespun to hook the outline of the wings.  I did the same and love the subtle effect rather than a solidly hooked outline.  Pat Cross also talks about using homespun and flannels in some of her books, so it's something to think about for your next project! 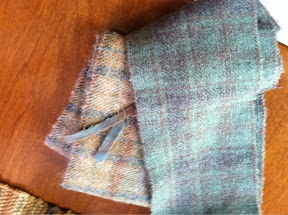 When I was hooking this mat up at the lake, I ran out of background wool.  Rather than cut into a new quarter yard of hand-dyed, I waited till I got home and used these three wools from my stash to fill in the empty spaces.  The two little strips are all that is left of a Karen Kahle piece that she gave us at  Tipp City last year.  I think they add character to the piece  and I like 'making do' the way the old time hookers did!! 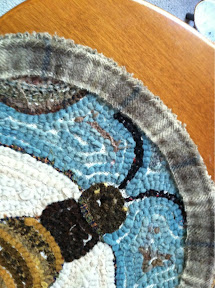 When doing the finish, rather than use rug binding, I used the same wool that is the border of the rug.  I tore it in 1 1/4" strips and hand-stitched it just like I would with the binding tape.  It really worked better in that the wool molded itself to the round shape and when stitching the inner circle to the mat, I could ease the wool in between stitches and not have little 'pleats' going around the mat.  It gives a much neater look and really worked out great!! 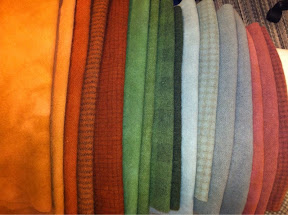 This is the result of yesterday's dyeing ~ I quickly put four pots of color on the stove, in the afternoon and was happy with what came out!! They show a little brighter here than they are in person ~ the greyed blue would be good for the background on the bee pad!  I left the dusty rose cool in the pot while we went out for dinner and although, I liked the color when I checked it before we left, it picked up some brown mottling from the dye bath.  I'm not crazy about it but it will be just perfect for somebody's rug, I just know it!

A little story for you ~ this morning I went to Menard's to pick up some planter pots and thought I would check one more time to see if the patio set I like was on sale.  It was ~ and with a rebate to boot!!  I was so happy that I bought it right then and there and called Sonny to ask him to  pick it up when he was out that way.  He said "Go back in and get your money ~ I just bought it for you this morning and it's here at home waiting for you!"  In the morning's newspaper ad, he saw it was on sale and pulled the ad out so I wouldn't see it so that  he could surprise me! Wasn't that sweet?  Is the old boy buttering me up for something?!

And one more little story ~ I decided it was time to take the Christmas wreath off the front door (since we have hookers coming on Saturday) so I opened the front door and reached behind the wreath to take it off the hanger and OUT FLEW A BIRD!!!!!  Fortunately, he flew out the door and not in (one year, a little birdie flew in the living room but that's an ordeal for another day!) and in the meantime, I got bird doodoo on my hand!  There is one little egg in the nest which Sonny boy moved to a nearby tree ~ his daughter thought he should have left it there, but that's between them!  I'm waiting a couple days before I put up the other one so he doesn't move in there ~ the bird not Sonny!! Compared to some stories I heard today of people with real problems, a little bird doodoo is minor ~ I'm smart enough to know what's really important!

We went to a Japanese steak house tonite  for grandson Luke's 13th birthday ~ can't believe he's that old ~ seems like yesterday that he would call me on the phone when he could barely talk and say 'come get me, Bobo'!!  The years go fast for sure!

I hope you're having fun wherever you are ~ I know we're just having a ball here!!!!!! Night night!
Alice

Alice ~
Love your little bee mat and the wool for binding is super! I will have to try that one day.
How sweet of Sonny!!!
I'll see you on the 12th!
Pug hugs :)
Lauren

Sonny is such a dear! Love how your bee mat turned out and the finishing technique is da bomb! Maria

Your bee came out great. your wool looks yummy. What a great guy to buy that set before your hookers come to visit
Cathy

Well, that old sweetie Sonny is a sly one. See, he still can surprise you! Your dyed wools are gorgeous.
Alice, I would have probably had a heart attack when a bird flew out of that wreath. I hope Momma has found her nest in the tree. Isn't it lucky when you get bird poop on you??

Alice your bee rug looks so grand on that chair. It's the perfect place for it.
I love the wool you used for the background and how you finished your rug off. Very smart.

I love the beautiful colors of your freshly dyed wool.

How about that, you've been outsmarted by your sweet hubby. That's just too sweet.

I laughed when I read that the bird flew out of the nest in your wreath and pooped on your hand. I wonder if a poop in the hand is better than a bird in the wreath,hahaha... Take care and have a nice day. Hugs. JB

The chairpad is lovely, and your new dyed wools are stunning.

Alice, I love your chair pad. I am waiting on my pattern to arrive. So thanks for the tip about usimng wool for the binding.
Your dyed wools are beautiful.
Where are you meeting with Lauren on the 12th? I should go too!
Linda

Golly, I just love the way your chair pad came out. I'll have to remember to use the homespun to outline like you did. It looks great! And I have plenty of homespun! LOL Love the wreath story!
Hugs,
Courtney

Alice, Thanks for sharing about using fabrics other than wool in our hooking. The bee pad is VERY nice! I'm loving the newly dyed wools too.

Read your patio set story outloud to Carrie and Kevin. They both laughed that Sonny had already bought it for you. Very sweet indeed! Carrie just commented she would like you both for grandparents - my children are almost grandparent less. ~Ann

Awww ~ tell Carrie to come on over ~ we'll be the most fun grandparents she knows!! I can't babysit though, because we'll be going to a party!! I was grandparentless and I know how she feels ~ I always envied my friends ~ I wonder if our grandkids appreciate the fact that we're alive, vital and crazy!!!

Linda - I am a vendor at the western reserve hook-in that day and Lauren is going to be there.. Wish u were too!

just came across your blog, fun! im farley new to blogging but love it. great idea using wool for the binding! i also love that bit of homespun in the mat! your mats great too! enjoy your new patio set so cool how you ended up with it!! almost 2!