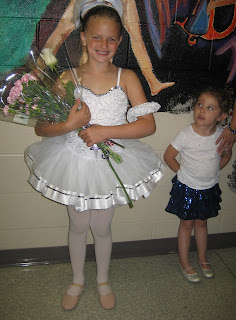 Miss Luci was a darling kitty cat at her dance recital Friday night!
Looking at her adoringly is 3 year old great granddaughter, Blakleigh! She sat thru the nearly two hour program and watched all the 'princesses' dance across the stage.  You can tell she was in awe of Luci ~ who did look like a princess!!  Luci has been dancing for quite a few years now and we've gone to all of them ~ this year Tad went along!! That was big for him to leave his TV, cd player and IPad!!  It was a fun evening!

I have to tell you that this hallway was busy with kids and parents and grandparents after the show and I told Luci just give me a quick picture!  When I looked afterward, I realized she was standing in front of a mural and right over her head was a caveman in a loincloth ~ see his legs!!!!!!!!   We laughed like crazy ~ I cropped the caveman out as much as possible but the picture of Luci is so good and her adoring fan, that I'm posting it anyway!!!!!!  We're going to keep it for her high school graduation ~ won't that be a nice surprise!! 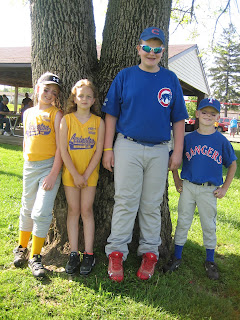 Yesterday was opening ceremonies for Little League!  We have four grands playing and since they started their games two weeks ago, these grandparents have seen a lot of baseball already!  So we went to the opening at 9 a.m. ~ came back for two back-to-back games in the afternoon ~ and Luke had a game at 7 last night!!  We do know they make very good cheeseburgers at the concession stand ~ we'll probably have quite a few of those over the next few weeks!

This is a picture of a Wooly Woolens pattern "Hazel's Runner that I admire every time I see it on a blog or Pinterest!  The other day, out of the blue, I ordered it!!  It came yesterday and I'm so excited!!  Don't know when I'll get to it but it's here when I'm ready!!  It's 20" x 60 1/2" ~ kind of big ~ and I have a great place for it in the entry hall or maybe even on the dining room table!!  Stay tuned!!

I still haven't put away all the wool from last week's vending ~ I just have to go down there now!  One thing I have been doing is sending pictures of our house to a group that may be interested in photographing it for a magazine.  It may or may not happen, and if it does, you'll be the first to know!  I have to say, it's an ordeal (at least for me) to get decent shots and label them properly.  They're very specific about what they want and since I'm kind of a fly-by-the-seat-of-my-pants kind of girl, I had to re-do some of what I sent!  So ~ stay tuned for that info, too!  That's how I keep you coming back here!!

On the top left sidebar, I have info about a beginner rug class. We have three students scheduled and I would be happy to add a couple.  If you would like to join us, let me know!

Have a good Sunday afternoon ~ it's really nice outside!  Here's wishing sunshine to you all!
Alice

She looks like a princess in her costume, Alice. And her fan is just as cute. Glad you had a good evening, and that you're keeping up with the baseball. I hope they all have a good season! Um, that rug is HUGE!!! Sixty inches is five feet long!! Wow, I'm impressed. You go girl! Hope you had a good day today, so far!

she is very sweet and it is a great picture. I sat through lots of recitals as my daughter dance from kindergarden to senior in high school.
Looks like a great group of ball players there. Have fun!
Cathy

sounds like you are busy watching grandbabies! you'll get a nice tan! those games go on and on! they sure are all cuties! love the rug pattern you ordered..i can wait to take a bit and hook. its been non stop here. enjoy your day!

Alice ~
What a great pic of Luci and Blakleigh. I was wondering what the legs belonged to.
I, too, say that rug is H.U.G.E.!!!
Your house is worthy of publication!!! Keep us posted.
Hugs :)
Lauren

Alice, I enjoyed seeing the photos of your grands. Opening day for our youngest was yesterday too.

I would love to come on May 30, but I will still have one more day of school left. If you have another one this summer and it works into my schedule - I'll be there! I need more wool.

What an adorable picture of Alice. She looks so professional holding her flowers as her little fan looks on. Great memories for her later.

You're a good grandmother going to all the grandkids ball games and recitals.

That's a beautiful rug and I'm sure that you'll have that hooked before we know it. It looks small on your blog but it's a big one . It will look beautiful in your home.

I'm keeping my fingers crossed for the magazine article about your home.

Have a beautiful week.
Hugs. JB