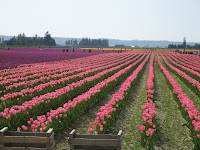 From our trip to Seattle!! What a whirlwind five days! One of those days was spent at the Tulip Festival about two hours north of where the kids live ~ and I believe everybody in Western Washington was there!! The traffic to get there was unbelievable ~ the exit ramps off I-5 were backed up just trying to get to the tulip fields! These were some of the fields of tulips with daffodils in the background. 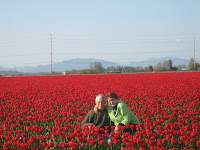 My son thought it would be nice to have a photo of the parents crouched down among the posies!! Crouching is easier said than done for this old girl!! It was more like a hunker and hanging on to the old guy for dear life ~ it's a wonder we weren't laying in between the rows! 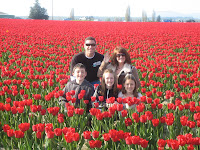 This is the very photogenic family that we went to visit ~ my son, Chris, and his wife Coni and kids Hunter, Haylee and Hannah!! It was actually hard to get these photos in among the blooms, because they had what I called the 'tulip police' running around, waving these flags on sticks, shouting 'get out of the flowers ~ get out of the flowers'!!! It was hysterical ~ there were way too many people to govern so as soon as the TP's went to another field, everybody hopped back into the rows to snap away!!!!! 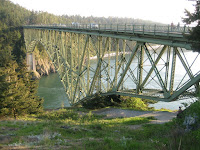 This bridge is out on Whidby Island, which is, I guess, where we were for the Tulip Festival ~ in the area of Anacortes and Mt. Vernon ~ which is a charming looking little town! The bridge is over Deception Pass and we walked out on it ~ pretty darned scary, if you ask me!! I could hardly look down into the water. It has historical significance in that some explorer was sent this way with his boats and it was very treacherous to get through. 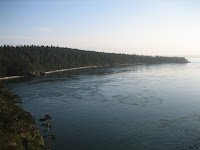 Part of the treachery were all these whirlpools ~ if I remember what we read on a posting there, the water from the land converges with the water from the sea and we could just see all these pools of whirling water ~ it looks like it could be quite a boat ride!! There were sightseeing boats going through there ~ it wasn't on my 'to do' list for sure ~ but very picturesque to see!

So that was our Sunday adventure ~ very fun to see all the beautiful fields of tulips ~ and the pictures don't begin to show all the people who were there ~ it was quite a day ~ and nice to do a family thing ~ something they might not have done, if we hadn't been visiting! So that was a good thing!! More later!
Alice
Posted by Alice ~ Folk Art Primitives at 1:29 PM

Hello Alice~Welcome back! your post made me laugh out loud! (:
It sounds like you had a wonderful time with your family, and the pic's were great...I love tulips, they're my absolute favorite! Try to relax as you unpack and get back to the "groove" of everyday life again! Blessings~Kathy

Sounds like you had a wonderful time. The water looks so beautiful. I am ready to get out in my kayak, but still a bit cool and raining here.

I love your blog

Alice ~
Welcome back ;-) I am so happy the "tulip police" didn't get you. I would have missed you...lol! I have never seen fields of tulips like that before. Absolutely breathtaking ~ I'm sure even more so in person. You have a great looking son and family. I'm sure it was good to see them. It's sunny here in northern Ohio today ~ woo hoo! Lauren