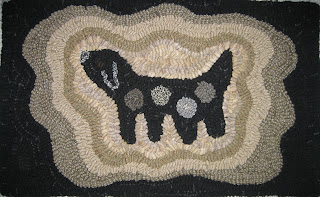 Oscar is a rug I hooked in a class with Jayne Hester two years ago now! I don't like to post without a picture so I quick took one of this little rug that's in my office ~ it's really Mr. Kitty's rug ~ after I finished it, every time I turned around the cat was laying on it, so I decided to make him a present of it!! Do you like my grammar? Yikes! It was a class in neutrals ~ really hard for me ~ can't say this is one of my best rugs ~ but the cat thinks so!!!!

So now that I have a picture ~ I can ramble! We were at the lake for a long weekend ~ I was going to say a quiet weekend ~ by our standards it was but we were still kind of busy! Friday, Sonny & his son, Brian had a fishing trip ~ a fundraiser for one of our political friends! On Thursday night, some of the fishermen and their wives, met for dinner in Port Clinton along with the fishing trip host and his wife ~ there were 16 of us! We invited anyone who wanted to come back to our condo and they ALL came!! It was fun ~ we had a little liquid refreshment and gave them a tour and by midnight they were all on their way back to their hotel. Friday, my daughter-in-law and I and another gal spent the day in and out of little shops and eating ~ you know how that goes ~ no day is well spent unless we feast!!! There were about 32 fishermen and they caught some walleye ~ not a lot ~ but everybody got some to take home. We ate ours last night ~ yummy!!

The kids had to leave after fishing so we stayed in Friday night ~ the fisherman was really tired from all the fresh air and 6-8' rollers out on that lake! Saturday night, we went out with our lake friends for a little supper ~ saw two different people from home that Sonny had built a home and an office building for ~ our friends say they know we're going to know somebody no matter where we go ~ most often we do! Then we stopped at a local watering hole and we ended up knowing the owners of that ~ the fellow used to be one of our sub-contractors here at home and is now a restauranteur ~ interesting change of vocations ~ wonder how that will work!! Last year, when we were visiting our lake friends in Florida, we walked into a breakfast place and there was somebody from Ohio that we knew ~ kind of funny!

We walked every morning ~ that was nice ~ I've fallen off the exercise wagon ~ again ~ so maybe that will get me jump started! So as I say it was a pretty low key few days for us ~ although one afternoon we did try out a new place for appetizers ~ we'll definitely make a return visit!

This week is consumed with Little League games ~ two last night, one tonite and another tomorrow night! I better go ~ my chariot awaits! Ta ta for now!
Posted by Alice ~ Folk Art Primitives at 6:03 PM

What a cute rug, simple but full of primitive charm.

Oh yes, it's definitely Oscar the magnificent! What a sweet rug...

Cute rug, but honestly I thought it was a dog!!!! Maybe that's 'cause I've been trying to draw Jimmie Dean to hook. I keep drawing him too realistic. Too technical.I'm trying to think more childlike with my drawing, but it's hard for me to do.
too old I guess!!!
Really love your CAT rug. LOL

You really keep me on my toes! Thanks for checking in. My last post is all due to you! Hey, I really like that little rug in neutrals. That would be difficult for me, but I'm very intrigued by the concept. I think I would need a class to do it properly. I just get so drawn to color...but the neutrals just have a certain "something" going on that I really like. I'm off for the summer and officially retired from teaching, so maybe my blogging and blog visiting will improve.

Thanks you guys for liking my rug!! Sheri ~ it is a dog!!! I just meant my cat, Mr. Kitty, adopted it!! My friend hooked one of these, too, and her husband thought it was a SEAL!!!!!!! Funny, hm?
Dulcy ~ happy retirement!!!! We'll see lots of blogging now!!! And yes, neutrals are hard when you have color oozing out your pores ~ but it's a good challenge for us!!!
Thanks for reading!!