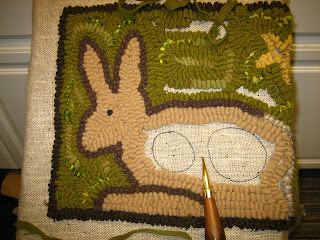 Happy hooking ~ that's what I'm doing ~ I'm happy as can be when I have time to hook!  This is a smallish rabbit rug that I drew on linen and as I go, I'm adding bits of handspun green yarn ~ it's wonderful lumpy stuff with lots of texture ~ it kind of livens up the background and is mixed with a green as-is wool and a hand-dyed green, as well.  The rabbit is a 9 cut  and the background, a 9.5 ~ so it's moving pretty fast!!  Should be done in a day or so! 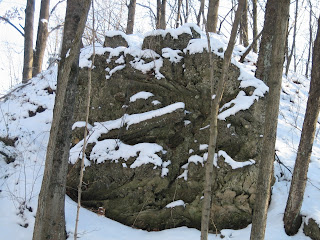 Sonny took this picture a few days ago down in the woods ~ it's a big puddingstone rock covered with snow!  Puddingstone is left from the glacier that was in this area many eons ago ~ it's kind of like the garbage that the glacier left as it moved across the landscape.  If you double click on the photo, you can see all cracks and crevices that were formed. 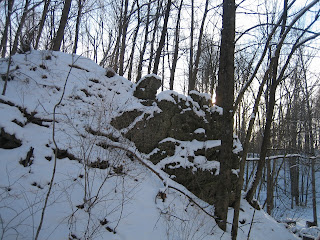 This is an outcropping of puddingstone  across the way from the one above.  I was actually thrilled because Sonny took these pictures and said he thought I might like them for my blog!!  He doesn't really even read this thing so I was shocked that he wanted to provide subject matter for it!  These are two of the biggest examples on our property but there are other smaller ones here and there.  We love it ~ we don't really know of anyone else around us  who has this and we enjoy telling people about it.  A retired geologist, who was a guest here quite a few years ago, enlightened us as to what these really are!

I'm kind of excited today because I just made plans to attend a hook-in Sarasota while we're there in February.  Searsport Rug Hooking is hosting their first annual hook-in with several vendors that I haven't seen before and it will be a chance to network with different  rug hookers.  A new friend, MJ, who took a class here this fall, invited me to join her and it coincides with our visit, so, finally, I made the decision to go.  The hardest part will be missing out on being with Sonny and our friends for the day ~ I told them to not plan anything fun until I get back!!

We had a fun weekend ~ Sonny boy turned 67 on Saturday and we went to dinner with friends and intended to stay and listen to a band from Put-in-Bay that was playing there.  But ~ my son and his wife and other friends were at the new wine bar in our little burg and called and texted and called some more until we finally went to join them!  It was great fun!  We knew almost everybody there and a good time was had by all!  We went out with other friends on Friday night and ran into Sonny's daughter ~ she secretly told the waitress that she wanted to buy the bottle of wine that was on our table ~ which was great ~ except it wasn't our wine!!!  Our friends were surprised and so was Sonny's daughter, the next day!!  Oh, well ~ her intentions were good!!  And our friends enjoyed it immensely!!

That's it for today ~ I'm working on tax things and other fun stuff ~ have to head to the office supply store shortly!  The second new dishwasher arrived a while ago and Sonny was here to check it out ~ so by tonite, my dishpan hands can take a break ~ maybe! Thanks for stopping by ~ hope all is well in your world!
Posted by Alice ~ Folk Art Primitives at 4:11 PM

I'm thrilled you decided to go to the hook-in. It should be an interesting experience. LOVE THE RABBIT. Are you the next M. Shaw?

Thank you, Woolmaven but no, I'll never be an MShaw ~ wish I was that talented!

Your glacial rocks are interesting..... bless Sonny's heart for wanting to help you with the blog! That is sweet!
Love the Rabbit rug and your use of different yarns.... I've got to try that real soon! I love that background color!
How exciting to go to a different area to a hook-in! PROMISE to not forget your camera!
Cathy G

Love your rabbit and lucky you. I looked at that hook in as we go to siesta key just outside Sarasota. but it is being held one week before we get there. Have fun
cathy

Alice ~
Happy belated birthday to Sonny and may he have many, many more!
Great rabbit. I just love the 9.5 and long for a 9 cutter head!
What fun to go to a hook-in in Florida. Lucky you.
Puddingstone ~ never heard of it. Thanks for the geology lesson.
Pug hugs :)
Lauren

Tell your sweetheart that he does good work and can give you photos anytime. That rock formation is not something found here in north Florida.

Your rabbit rug shows your great sense of color. I have a #9 and #10 blade for my Townsend but haven't tried either yet. Does it really go that much faster?

Where in Florida are you planning on being? Remember we have had some chilly weather this year so at least bring a sweater besides the bikini!!

Hi there Miss Alice....first of all let me say....I love the rabbit. The background is such a fun color. I wish I had your adventuresome spirit. I love the color and the outlining around the rabbit is terrific.
As for pudding stone...we have them here and they are highly sought after. The main color is a gray and pink (the gray stone is polka dotted with pink). However, a couple of summers when I was knocking on doors, I came across a black stone with white polka dots....it was the neatest rock I had ever seen. The lady found it along the shores of Lake Huron in NOrthern Michigan. Maria

Hi Alice...love the Rabbit...what fun colours! Catching up on all your activities makes me tired..!! LOL You are sooo busy! I'm glad you have your dishwasher so you can protect those hands for hooking!!! :) I'm zipping right along on my Mystery rug...still havin' fun!
Hugs to you, Sunnie ;)

Love your rabbit Alice! thanks for all the interesting info!

Alice, first of all, happy belated birthday wishes to Sonny! I too love your rabbit rug and wish my hooking looked as good as yours. I'm working hard on breaking my 'packing' addiction.

Your snow pictures are so pretty but we have enough of our own too. I'm tired of the cold and snow since I've got so many things to do outside and the cold is making me hurt. Wish I could join you in FL for the hookin with Searsport!

So you have been in a bunny mood too! Very cute. I like mixing yarns in with the wool strips. Makes it interesting.
Speaking of interesting - that puddingstone is very cool. I hope you are hooking away and listening to the gentle humm of the new dishwasher.

You are truly talented as I can't draw stick people with a ruler never-the-less a pattern beautiful work I collect hearts and love those two pillows...Just beautiful...Very interesting photo thank you for the history wonderful...Have a fruitful weekend and a belated Happy Birthday to Him...Patricia

hello dear Alice! Love the rabbit!!
Yes..in my book you could be an m.shaw! So talented! (: ..and belated birthday wishes to Sonny! Enjoy your weekend!(;