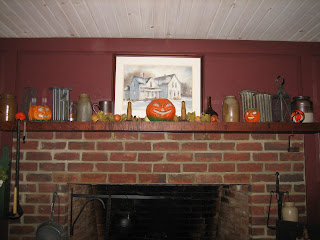 Aren't these scary looking? I LOVE Halloween ~ maybe it's "my" time of year!! I can be pretty scary sometimes, you know!! The pumpkin faces are antique paper mache and were purchased years ago at an auction along with the noisemakers that are on the ends of the mantle. I feel pretty lucky to have the paper mache pieces since you don't run across them very often. 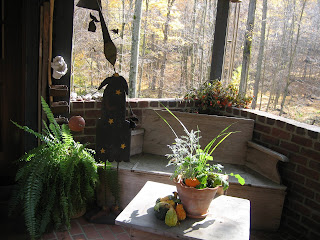 The porch is all dressed up for the holiday, too! The witch is a piece I bought from Dan Dipaolo at a wholesale market ~ there is a similar pumpkin lady in the house. I paid dearly for those pieces of artwork ~ and now I see him with smaller versions much more affordable!! Guess we all have those things we thought we HAD to have!! There's some bittersweet and gourds to add to the porch decor. 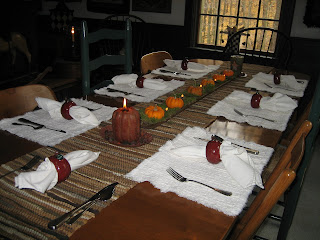 The table centerpiece turned out pretty good ~ as I've said before, for me, it's more about the food than the table so I have to really make an effort to do something a little interesting. Actually, I figured this out yesterday ~ which is a big deal for me! Usually, I'm scurrying around when the guests are about in the driveway, throwing something together! So yesterday, I went to the woods ~ picked some nice thick moss which I left outside overnight (one year, I brought it right from the woods to the table and holy crow! bugs were crawling out of it ~ before the guests arrived ~ thank goodness!). This morning, I lined an antique bread rising board with the moss, put mini pumpkins on it and little battery operated candles ~ looks pretty good, me thinks! I have these apple napkin rings that I got at Pottery Barn a long time ago on clearance that go perfectly with my mom's Franciscan Ware Apple dishes. As a kid, we didn't have much, but my brother bought her these beautiful dishes that she just loved ~ and now I have them along with more that I was able to pick up at auction ~ now, there's service for twelve and I love them, too! 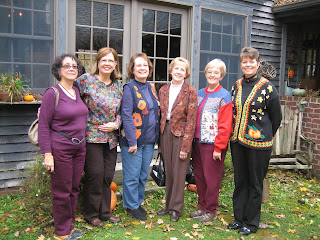 Well, once again ~ I make myself laugh!! I told you all about the centerpiece but forgot to mention that I had a luncheon group here today!! It was too much to re-type it or move the words around ~ my cart was before the horse ~ which is not so unusual! There was a great group of gals here today ~ they started their annual quilting retreat weekend here with lunch and a house tour! Last year, they came to shop in the wool room and this year, they added lunch to their day! I fed them rosemary lemonade, chicken pepper pot soup, muffins, Carol's broccoli quiche, frosted jello and black forest cake!! They left stuffed and planning to return! What better compliment could there be?! 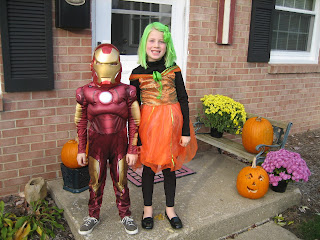 Last night was Trick or Treat ~ this is Logan and Jordyn all ready to go ~ a half hour early ~ they were so anxious!! I missed getting Luke and Luci's picture ~ I was there too early and when we went over for our annual Halloween supper, they were out of their costumes and knee deep in candy!!! Which they shared with their Bobo and Pa!! That was a bonus! After 10 years of trick or treating with the kids, that phase is over!! Luke is too old now for his grandma to go along and Luci is into her girly friends! So, with salad in hand, we went over for chili and grateful for the years that I got to go up and down the neighborhood streets and carry discarded gloves and masks for the little people I hold so dear!!

While I was writing this, I have been watching Patrick Swayze's wife, Lisa, talk to Oprah ~ her first interview since Patrick's death. One thing she said that rang so true with me, is that before his illness they lived in the 'future' ~ what they were going to do, where they were going to go, etc. ~ and once diagnosed they learned to live in the moment. I don't know why ~ but Sonny and I really do live in the moment ~ we always have. Maybe because we're a second marriage ~ maybe because we like to have fun ~ maybe because we don't want to have any regrets when we leave this planet! Not to say, that sometimes maybe we've been too much in the moment ~ we never really thought that we would actually get old and not be able to work like crazy ~ but we do the know the value of living in the now! That's my wish for you today ~ live in the moment ~ because all we have is right now ~ today is a gift and that's why it's called the 'present' !!!!!!!!!!

Alice, your decorations are GREAT!!! Table looks lovely and the food sounds yummy!!! I am going to move closer to you so I can come to your house for luncheons!! LOL
Great post.....I too tend to live in the now, I think if I lived in the future I would probably not climb up on the back of my horse.But I try not to think about all the things that could happen while riding...I just want to enjoy the ride!
Happy Halloween!!!

Alice.....good advise. I have to remember that more. I used to always say "Someday". I don't do that quite so much lately.
I miss my little grands.......they are all so big now but making us quite proud of the way they are growing up.
Linda

Alice, First let me say thank you for visiting my blog and sending me your prayers for my recovery. It will be a LONG winter and spring. But I'm tough!
My aunt also had these Fransiscan apple dishes. I loved them. And there's no telling whatever happened to them when she finally had to go to the nursing home. She had two boys who I'm sure didn't see the beauty in them.
And one more thing. Your last lines seemed to be written just to me, (I'm going to take it that they were anyway! LOL) To Live in the moment because all we have is right now. Today is a gift and that's why they call it a present! I think I'm going to paint that on some canvas and hang it in my house as a reminder. Thanks again, dear friend.
xoxo Sheri

I Play Outside The Box said...

Logan and Jordyn sure look cute in their Halloween outfits! You have very nice displays too!

Alice ~ Those are great words to live by. I need to remember them more often.
Pug hugs :)
Lauren