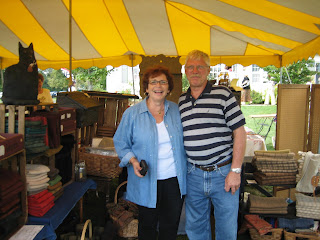 Okay ~ here we are ~ me and the old guy (that's what I like to call him!) near the end of the show!! Our day began by driving the hour long trip in a driving rain!! I was pretty discouraged and thought we might like to go back home ~ but of course, I would never do that!! We set up in the rain and covered everything at the edge of the tent with plastic and tried to work around all the crates and each other in harmony!!! And we did!! Just before 10 a.m. one of the other craftsmen said to look in the West ~ there was blue sky and it was on it's way!!! Yippee!! Wished I had taken pictures of the booth when it was all stocked and neat but it was all coming together too fast!!

The weather shaped up ~ the shoppers came ~ they were very generous in their wool buying and the pieces of Halloween folk art that I brought along found new homes!! Also sold some funky mirrors I had picked up several years ago! So I was a happy woman!! We had to set the booth up a little differently than usual, so everything would be at the back of the space rather than at the outside edges of the tent ~ but it worked out great!! We ended up standing a good bit of the time ~ I think Sonny put our chairs out around 2 o'clock ~ because we were really busy and had no time for sitting! Of course, we know lots of people ~ rug hookers and people from my hometown, which wasn't too far away, and I met face-to-face a local gal whose blog I read and she reads mine!! That was fun! We have some mutual friends too ~ one being my daughter-in-law, Cheryl. It's just so much fun to see so many faces that we know and even though we didn't all get to talk to all of them, I knew they stopped by!!

We skipped the meal that is provided after the show, because we had an anniversary party to attend as soon as we got home!! We were both so tired that we fixed a cocktail and grilled cheese sandwiches and called it a night!! I can't believe it!! I hate when that happens! But sometimes you just have to 'say uncle' !!!

Today, I'm putting the wool room back together ~ putting everything back in the cubbies and baskets and bins. And I'm working in my supply closet where there is so much cotton fabric from when I was a doll maker ~ I'm shifting some of that around and making room for my own personal stash of wool and patterns, etc. so that it's not stored right next to the wool that's for sale. You know how that is ~ I have to make more of mess to get to the end result of a neat wool room again!! Up to my ears in wool ~ that's when I'm happiest!! I found a bolt of yellow cashmere that I bought a while ago ~ so I'm washing that today and will work on dyeing some of it!! Also found a bolt of vintage mattress ticking that is very nice. I like to use ticking as a binding sometimes ~ so that was a nice little find!!

And I have to lose 50#'s in the next two weeks ~ IT'S CLASS REUNION TIME!!! I should stay on the treadmill for the entire time ~ that might work!! Oh, oh ~ detour ~ my friend, Heidi, just called to meet she and another friend for lunch!!!
Ta ta for now!
Alice
Posted by Alice ~ Folk Art Primitives at 10:07 AM

Alice - YEEHAWW!!! Sounds like your show and the day came together at the last minute! Yay!! I bet you are absolutely whooped - i know i am right after a show!! I think it's a culmination of all the hard work ramping up for it, the nerves and all the energy expended the day of... and then ya just fall down once you are "allowed" to relax! LOL!! Congratulations on a successful show!! hee hee... hope you have fun just PLAYING in your wool now! :D

Alice,
It was very nice to meet you in person. All your wool was beautiful! The wool that I bought from you I'm using as a background for my lastest rug. It's working out great and I will post a picture of the rug on my blog. Glad you had a good day!! Julie

Hi, Alice, and it's nice to 'see' you!! You and your darling husband make a very nice pair. Oh, I'm so glad to hear the show went well and the weather finally cooperated. It sounds like you sold a fair amount, had a good time meeting people and, even though you're exhausted when it's over, it was an all 'round good show.

We had a really busy weekend too but I don't know where the time went. Oh, Saturday was my monthly hookin at Judy Cripps' house so that accounts for a good 5 hours.

I need to force myself to get into my spare bedroom (my wool room) and clean up a bit. I have wool in my tote bag and also on the antique secretary in the kitchen that needs to be put away in it's proper place.

Thank you so much for posting. I've been waiting to hear how the show went and if you sold what you wanted to. A big thank you to Mother Nature for finally cooperating with the sun!

Hi Girls ~ Bren, I love it when things come together!! So nice to meet you, too, Julie (who, by the way, is beautiful!) and I'll be anxious to see your new rug!! JoJo ~ he is a darling husband, you're right!! Your hook in's at Judy Cripps house sound like lots of fun ~ aren't you glad you're able to go again!! Had a four hour lunch w/ my friends, now back to the wool room!!

Alice,
Great news for you and the 'old' guy...your show sounds like it was a resounding success; hurray!!!

I wished that I lived closer and could have helped you 'part' with some of your yummy wool and prim goodies.

You should rest up a bit after all of that work, geeze girl, I would love to have some of your energy.

Yes, Trudy, I wish you were closer, too!! I think we would have a lot in common! My energy level is because I'm driven ~ it's all smoke and mirrors!!!
Alice

Primitives By The Light of The Moon said...

What fun...glad your show was a success!
:)Ginger

Hi Alice!!! Glad you and the "old guy" had a good time and I know the buyers of all that lovely wool will have such fun working with it!!! : )