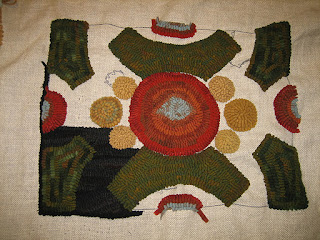 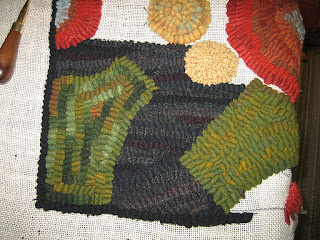 This morning, I took some time to go to the hooking room and start on the background of the Tipp City rug.  Karen Kahle does lovely striated backgrounds and I'm trying to recreate that only doing it in an 8.5 cut. Karen uses a much narrower cut and gets a great effect ~ I usually hook in a 9 and a 9.5, which is very chunky compared to hers.  Last year, when I was recreating another of Karen's background styles of hooking small bits of various wools, it worked out well. She suggested to me that I not change my style but try to make it work with what is typical for me.  So I'm doing the same with this striated background.


The second picture is a close-up (blogger wouldn't let me move the picture).  You can see there are lots of colors that equate to black ~ same values of different colors ~ I might be learning something about value after all  ~ it's a hard concept for me!
I do wish I had hooked the outline of the entire rug before I did the designs ~ should have used whatever I had with me and then rehooked black when I returned home ~ lesson learned!   It's making for a wavy outside line ~ since there is a generous border of linen outside that line, I may design a geometric border to make this a bigger rug.  Stay tuned and see just where this goes ~ we're both going to be surprised, me thinks!!! 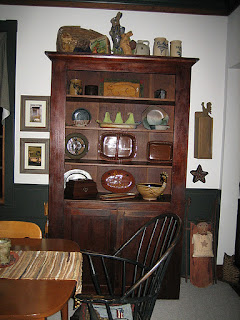 Look at this beautiful cabinet that our friend, Marge, GAVE to us!  She's 84 and just kind of cleaning out things ~ no children ~ so she's giving things to people who appreciate them.  Evidently, years ago, Sonny and I both admired this cabinet and she remembered that ~ neither one of us did!!   ﻿The guys brought it home last week and set it in the garage where I attacked it with a vengeance!!  I scrubbed it twice with Murphy's Oil Soap ~ buckets and buckets of it ~ and waxed it twice with Howard's Feed and Wax (love that stuff ~ bought it in Ligonier).  It had been in their basement for years and it definitely didn't look like this when it arrived!  I got it done in one day and they got it set in that night!  Houseguest Jackie was arriving from Pa. and I wanted it all done before we left town.  The Ethan Allen hutch that resided there moved to my son, Teddy's house ~ they were having a party Friday night and Miki was anxious to get it in place for their gathering!! We were motivated women!!!
On Monday evening, we had Marge over for dinner so she could see how great her gift fit right in at our house!!  We took the doors off ~ they are hand beveled ~ great doors!  But, I couldn't display my redware and pottery and with the doors open, it just overwhelmed the space.  So, they're in the basement, marked so that when we're old and dead, someone will know where they belong!
This is it ~ things can go to pot around here in a hurry ~ we have unexpected house guests ~ just went to Subway and ordered a gourmet meal ~ yikes!!!  I think it might be cocktail time!!!  Talk to you soon!
Alice
Posted by Alice ~ Folk Art Primitives at 9:04 PM

Well Alice, I learned something new this evening. A stirated background. I've heard of swirly backgrounds.

Your geometric rug is looking great and I bet that it's harder than I think to design this sort of rug.

What a special friend Marge is. She certainly has a great memory and that cabinet looks fantastic to display your pottery. JB

I like the colors in your rug. I think color in general is a hard thing to learn. Love the cabinet I bet she loved seeing it all set up.
Cathy

That's an interesting concept for designing a rug. I think it would work well by using various applique shapes from quilting too. I think I'll give it a try.

Alice,
LOVE your cupboard. What a treasure from Marge. Is it to the right as you walk in the dining area? It is perfect!!!
Your rug looks great!
It sounds like a great weekend to spend at the lake.
Pug hugs :)
Lauren

First, that was very nice of Marge to give you that beautiful cabinet.

I've always wanted to take a class with Karen Kahle. And I am loving your rug, the colors and particularly the cut. Sure does go faster with 8.5 doesn't it.

And, is this your design? Very nice whoever designed it.

Marge's piece of furniture is a treasure. How very lovely it is. Wish you would have taken a "before" picture!!!!!