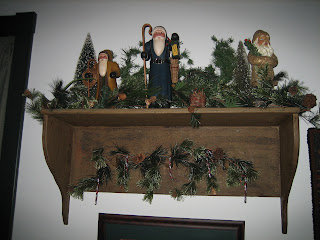 The big day is over ~ it was hectic to say the least ~ but fun! I thought I would post some more pictures of our decorations ~ the two Santa's on the left of the shelf are hand carved by Mark Glandon ~ I did shows with him years ago and people would line up at the door an hour early to get in there and clean off his shelves in short order. I was lucky enough to purchase a couple before the crowds ascended on him ~ and since I only do two shows a year now, we have not crossed paths in a long time. 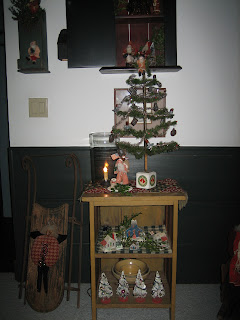 This antique turkey feather tree was a bargain purchase from a local flea market many years ago. The Santa on top is old as well as the one in the cupboard directly to the left. The others are reproductions ~ the little glittery houses and the white trees are antique pieces that were all in a box at an auction! Some of these bargains help offset the things that weren't so well priced ~ it all evens out along the way! 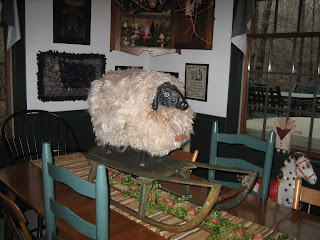 The Ligonier sheep still adorns the table ~ on the bread rising board below are pomegranates and boxwood. In the cupboard in the background are some more vintage Santas that we've collected. 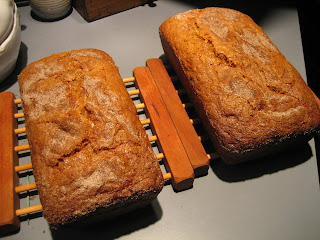 Last Tuesday, the friendship bread starter was ready to bake so I baked with a vengeance!! Instead of giving away the starters, I made bread out of each one ~ 8 mini loaves and 6 big ones ~ lots to share with family and friends! The last remaining starter went into the freezer for later in the winter ~ in the last months, I've baked a ton of this bread and thought I needed a break ~ you have to make a commitment to that starter that lasts for 10 days and it goes on and on ~ but it's so good! 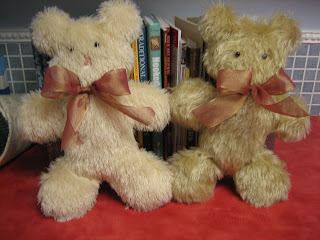 These mohair bears came to life, so to speak, on Christmas day ~ after breakfast at my son's, I came home and made these two bears in an hour and a half to have wrapped and under the tree for granddaughters, Jordyn and Luci!! Organization ~ I've just got to get on top of it!! Today, I actually have two more to make and get in the Seattle package. They are at my daugher-in-law's parents for the holidays, so their package arrives after the first of the year ~ I tell them it's something for them to look forward to!!!

On Christmas day, there were about 23 people here all day and a few stragglers who stopped by to see grandson, Nick and great grand-daughter, Blakleigh (pronounced with a long a). There were 19 of our kids and grandkids, my former brother-in-law and sister-in-law (I love to keep everyone close and they are my kids aunt and uncle), a friend of the kids whose mom was real sick and she was alone, another friend of the kids that spends every Christmas with us (Tad thinks he's his cousin!) and on it goes!! We ate, drank and were merry from 2 p.m. till 10:30 at night!! And the only casualty of the day, was a kid's head made a huge dent in a wall in the exercise room ~ the good news is that he didn't get knocked out and Sonny can fix the wall!!

Tonite Luke and Luci are staying all night - their parents have had so much company over the holiday, that I thought they could use a break and the kids haven't stayed over in a long time. I'm using the left over turkey to make turkey strata ~ Luci will like it ~ she says I make 'gooey' food ~ that's short for fattening!! I'm taking Tad to the doctor this afternoon ~ he's getting a bad cold and we need to nip that in the bud before the coming holiday ~ and I need him to be healthy so we can go about our New Years celebration!! We were going to Kelley's Island for New Years ~ our friends who invited us are disappointed ~ but weather is a huge concern ~ if the lake would freeze overnight, we would be stuck there if the ferry can't run ~ and that wouldn't be a good thing!!

So if I don't post until we return, HAPPY NEW YEAR to all ~ a healthy, happy and prosperous New Year wish from Alice & Sonny, here in Ohio!
Posted by Alice ~ Folk Art Primitives at 11:11 AM

Your decorating is GORGEOUS!
Happy New Year to you, my dear friend Alice...looking forward to seeing you in 2009!
Kris

Alice, I know I sound like a broken record but boy, I sure love all of your pictures. Even though it's still an hour 'til the New Year here in Kansas, I'm going to wish it to you now.

I tried everything I could but would you believe that the entire family got sick after Christmas? Daughter felt it coming Christmas night, Gerry felt it Friday and was sick all weekend, and even though I fought it, I got sick on Sunday and have spent the past 3 days in bed moaning. Terrible sinus pressure, the cough, bronchitis and my hair and teeth hurt. It might not be the flu but it sure feels like it.

I haven't even plugged my computer in for the past two days!! Now that's sick!!!

I hope Tad didn't come down with this crud and hope you have had a wonderful celebration of the new year!

Your decorations are wonderful! I particularly like your old Santa's (both authentic and newly carved). And your Ligonier sheep is fabulous! Looks perfect on the sled as a centerpiece. I hope that whatever you ended up doing on New Years was fun and you were surrounded by friends, family and lots of love. I hope the New Year brings you lots of pleasure, good health and wonderful things.
Hugs,
Lauri

Thanks, friends, for your comments!! I can't tell you how much it means to know that you guys read this and to know that there are lots of online friends out there sending good wishes our way! Blogging is a wonderful way to be connected to people with common interests ~ Let's see what 2009 brings our way!!!!!!
Alice

Alice,
Did you ever make it to the new Wool Snippets group?

This antique turkey feather tree was a bargain purchase from a local flea market many years ago. The Santa on top is old as well as the one in the cupboard directly to the left. The others are reproductions velvet pillow cases , lightweight cotton blankets for summer , the little glittery houses and the white trees are antique pieces that were all in a box at an auction! Some of these bargains help offset the things that weren't so well priced ~ it all evens out along the way!