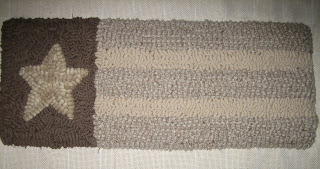 Last night, I was hooking late, as usual, and was becoming very annoyed with the way the lighter stripe was turning out. I think there were a couple of reasons ~ one being that I hooked in all three darker stripes first ~ maybe I should have hooked them in succession because I was trying to fill in and nothing was working out evenly with the 9.5 cut I was using ~ so then I did the fill-in with a 9 and 8.5 and 8. Another reason may be that the two colors were very different weights of wool and the lighter one just doesn't stand up to the other one as well. It was just all annoying. So, I outtened the light (I think my Canadian cousins say that or I heard it somewhere!) and went to my bed!

This morning, I threw some laundry in, made a pot of coffee and went back to the hooking room! I hooked the star last night and finished the background just now so I could get a posting done. It looks better to me today ~ what do you think? The colors look pretty good to me but when you're used to dealing with lots of color, this takes some getting used to. This pattern is 8" x 20" and I can draw it on monk's or linen ~ you can email me at gfraizer@neo.rr.com if you would like to hook one for yourself! 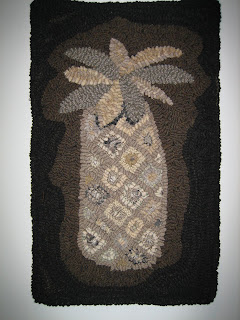 This nice pineapple is my first foray into hooking in neutrals. It was done in a class with Jane Hester, who is the neutral guru!! I really liked the way this came together, although the pineapple segments were a real struggle for me. I came home after class and tweaked it by adding some wool out of my scrap basket ~ it was another one of those that was a challenge but in the end, I think it all works very well! I like it when everything just flows and not much thinking involved ~ cause my thinker is worn out!!

Another busy, fun weekend ahead! Tomorrow a hook-in, tomorrow night a clambake and Sunday a wiener roast in the gravel pit (that's where we live) with all our kids and grandkids ~ except for the ones in Seattle. The weather is outstanding right now, so we're going to take advantage of it! At some of our fall gatherings, we have made applebutter, soap, ground up and jarred horseradish ~ I don't think we have a plan for this year but maybe we could come up with something before Sunday! So ~ I'm off and running for today ~ gotta bake something to take to the clambake ~ finish the laundry ~ go pick up a plat plan for an upcoming job and it goes on! Have a nice Fall weekend wherever you are!
Alice
Posted by Alice ~ Folk Art Primitives at 11:21 AM