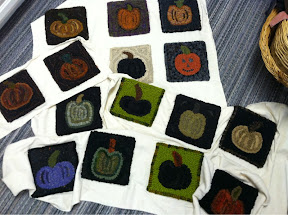 Here are the little mats I've been hooking for my class next week! The students will bind them ~ after we spend the morning learning different finishing techniques. Now I'm hooking little rectangles for them to practice on ~ what was I thinking? I was thinking I want them to come away with some new knowledge and feeling like they really got something for their investment !! I sure hope both of these things happen!! 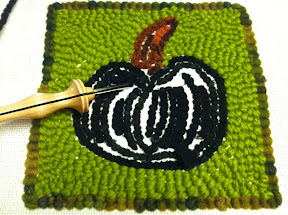 I've learned to use my needle punch during this process! Maria and I bought them almost two years ago and I just didn't take to it too well. I really like using yarn ~ I tried it with wool strips but it was such a chore. One way that it came in handy was to fill in the voids left from using a wide cut wool ~ from the front it looked great but a little sparse on the back. Since I Ike to combine various fibers, filling in with yarn worked great!! 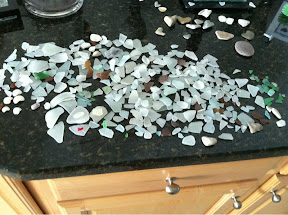 Last weekend, we did a lot of beach glass hunting and even though we didn't get a lot at one time, it added up! I found a teeny piece of red, a couple of pieces of yellow and Sonny found an orange/yellow piece. So that was fun!

For the first time, I was a little unnerved by some kids on the beach when we arrived at 7 a m. They had been drinking I would guess and volunteered that they had been up all night!! They were scroungy looking and the fact that there were five of them made me very uncomfortable ~ we cut our hunting short and left them to continue whatever it was they were doing! 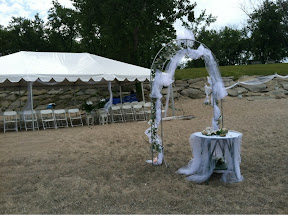 We had a much happier experience later in the day somewhere else ~ This setup for a beach wedding!! 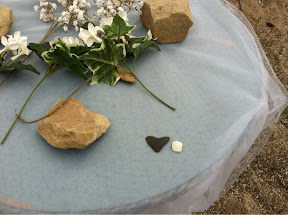 On the little table, set up like an alter, we left them a present for their day ~ Sonny left a heartstone and I left a lucky stone ~ some of that day's bounty from the beach! We hope it meant something to them!


Posted using BlogPress from my iPhone

Great pumpkins Alice . . . good luck wiht the class at Sauder and have a grand time!!!

Alice ~
What sweet little pumpkins! I'm sure your students will have a ball and learn lots. I know two of your students ~ Char and Stacy.
You had great luck with the beach glass. It's been rather slim pickins in Lorain lately.
Pug hugs :)
Lauren

Alice, How sweet of the two of you to leave the beach glass for the wedding! I hope they noticed it and the groom put them in his pocket as a memento of the day to treasure always. I hope to get over to SV to see you when you come for the Rug Hooking show. ~Ann

I saw that you were teaching at Sauder. My work schedule doesn't allow for any more time off...maybe next year. I hear Sauder is great. You are an awesome teacher to provide so muc to your students.

Thank you, Michelle!!! Next year, save some of your vacation for Sauder ~ you'll be happy you did!! Ann, I hope we get to see each other!! And yes, I hope those little mementos added to their day!