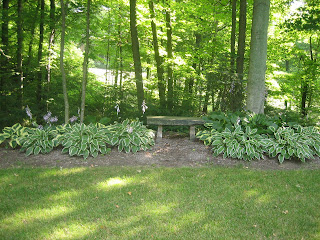 Just a quick post today ~ these pictures were taken a week or so ago ~ despite the fact that it's been bone dry, most of the garden still looks pretty good. We did get an all day rain,yesterday ~ praise the rain gods!!! This old stone bench surrounded by hostas, is one we purchased a few years ago ~ my former sister-in-law, Gwen, has an antique/odd things store in the heart of Amish country and this was sitting there just waiting for us to buy it!! I love this old bench and think of Gwen every time I look at it! 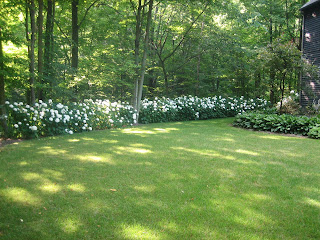 I absolutely love hydrangeas! This hedgerow got planted a little at a time from pieces of hydrangea that I would pull out of the ground and scratch out a little divot in the dirt, stick the stick with a little root system on it in there and voila! A hydrangea hedgerow! 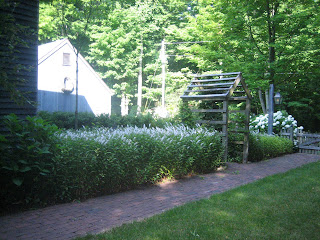 The white flowers here are goose-neck loosestrife ~ the blossom kind of swoops down and looks like a gooses neck ~ they spread like crazy ~ would anybody like some? The hydrangea at the right of the picture is the mother plant for that long beautiful hedgerow of white! 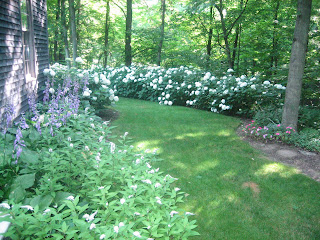 Another shot from the back deck ~ more goose-necks and some hostas in between! I actually went out and worked in the garden last evening ~ the first time for a while ~ we had such a nice rain that it was definitely time for some weed pulling. And this morning, I walked out to Sonny's shop to get the newspaper (the old guy usually brings it in to me but he forgot this morning - maybe he thought I could use the exercise?) and ended up working outside for an hour. We have a lot of May apples and they have turned so brown that I needed to clean that area up ~ so I've been on a little roll in the garden (that sounds good) and now we'll be gone for the weekend, so that's the end of that!!!

I did do some hooking this week ~ I hooked a little mat for my friend's daughter who is having a baby ~ it's kind of cute ~ I'll post the picture next week! Her shower was several weeks ago and since I didn't go, I had the gift here at home to take to the lake and give to the new grandma ~I kept forgetting to take it and then I read Dulcy's blog and she hooked a little rug for an expected baby so I decided I would do the same!! So the gift changed but I think it was a better choice!! I hope they like it ~ I don't often give hooking as a gift because ~ well, you never know!! We'll hope for the best!!

Have a good weekend ~ ours is jam-packed ~ hopefully, the weather cooperates ~ tomorrow sounds pretty wet ~ and we're headed to Put-in-Bay with our lake friends ~ it's Christmas in July over there tomorrow ~ should be lots of fun!! See you next week!
Alice
Posted by Alice ~ Folk Art Primitives at 10:16 AM

ooohhh Alice..I love hydrangeas..and yours are gorgeous! I love the goosefeathers(?) too..I am particular to white flowers as our house is grey and I think the white is a good contrast! Your garden is just beautiful!! Have fun visiting put-in-bay! Are you going by jet ski?

Alice....your garden is beautiful! I'm currently trying to design and hook a bag with hydrangeas as the main design. I just love them!

Alice ~
Love the garden bench and the hydrangea hedgerow is gorgeous. I've only started one hydrangea from another...I'll have to try again. Gooseneck loosetrife. You are right about them spreading. I had them in the garden at my previous house and NEVER AGAIN!!! They spread everywhere and were impossible to get rid of...so I moved. Just kidding!
Hope you had a great weekend and a fun at Put-in-Bay.
Pug hugs :)
Lauren

Your yard and gardens are beautiful. My yard is plain, I am too lazy to go out and start digging;)